Thanks for all the well-wishes, public and private. To sate any curiosity as to exactly what went down, and without getting into the gory details, last Wednesday morning I woke up with an excruciating pain in my stomach that continued to escalate until the paramedics hauled me off to the emergency room. There, it was more or less discovered that a hernia I've evidently had a while had reached critical mass, and just a few hours later I was hustled into surgery, where they stapled my stomach and presumably discussed their love lives, per "Grey's Anatomy". 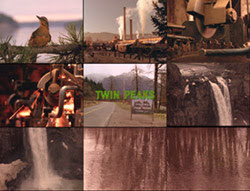 Since returning home on Friday evening I've been working my way through "Twin Peaks: The Complete Second Season", which is actually a rather soothing way to convalesce. Perhaps needless to say, I won't be able to file a review of it by street date (April 3rd), but preliminarily: don't hesitate to pick it up. I have some quibbles with the A/V presentation, chiefly that the Lynch-helmed segments--justifiably, but still--have obviously been given more TLC than the remaining episodes (though the screams of Ronette Pulaski do an unsettling 360-degree pan around the room at the beginning of episode 10). And on my player, the CBS "menu/previews" interface that opens the first disc refuses to acknowledge either selection, so you have to wait a full minute for it to play itself out.

As for the show itself...I really like the David Lynch instalments. If that sounds fanboyish, well, I hope to acquit myself in the near future.

Like it says on the mothersite, not sure when regular updates will resume, but I'm grateful your patience and certainly motivated by your voracious appetite for new material. In the meantime, I humbly return the asylum to the inmates.
Posted by Bill C at 2:05 PM 47 comments:

Mortal Thoughts in the Trench

This weekend’s update delayed, I’m afraid, as Bill, our fearless leader, was rushed to emergency surgery tonight. I’m assured that the procedure went well and that he’s improving steadily. Our thoughts are with him and his family at this time.

It’s a shame that mortal thoughts seem at times the only ones that turn our eyes from the nominal prize – and it’s a stern reminder of how temporary all of this is no matter our attempts at legacy through these letters. I’m sure Bill’s going to be back in the saddle soon – until then, the inmates are running the asylum.

You can find my reviews of Reign Over Me and here. I reviewed Shooter, too, though the final form didn’t find its way online before Bill was stricken. Highlights from it, such as they are, include me calling it the redneck Bourne Identity and generally appalling in every way except that it seems to have its heart in the right place. It’s a film from the far left that proposes the same tactics as the far right – I suggest that it’s a shame that subtlety and intelligent discourse just doesn’t carry the same weight as all those dead patriots. Interesting as an exercise in re-calibrating one’s moral compass – interesting, too, as a companion piece to 300.

I skipped something like twenty press screenings of Pride for many reasons. Let’s see if you can help me articulate them.

While watching Nicholas Roeg’s fascinating Performance, I was reminded of his exceptional Don’t Look Now with Julie Christie and Donald Sutherland. Which then posed the question of which are the best, most erotic, sex scenes in all of moviedom? I received a couple of letters asking if the sex scene in Factory Girl between Sienna Miller and Hayden Christensen was real: something I really thought about because it was prosaic enough to just possibly be real – I challenge anyone to get just one rock off watching non-professionals have sex (see Tommy & Pammy, or Paris & that poor bastard). Anyway – my nominations would begin with the love scene from Don’t Look Now - maybe the ménage a trios from The Hunger?

As to the previous post’s thread about it sucking to go to the movies nowadays. . . yeah, it well and surely does. Not putting a gravestone on it, just saying that I’ll see Jeff’s twenty bucks and raise it another fifty for babysitting and a ticket for the wife. The frickin’ Globe had a common pit, though, right? So it’s not like other people being hell is a new thing – it’s just that I think there’s weight to the idea that the older one gets, the less shit one’s willing to eat. There’s still no sub for seeing a film projected – there’s actually a different physiological, much less philosophical, reaction to the same images projected vs. broadcast – but, man, it gets hard sometimes with the seat kickers, text messagers, and narrators. Solution? Don’t got none. One thing’s true for me regarding my home theater, though, is that I spend a lot of time marveling at the technology and less time just watching the goddamn movie.

Did speaking gigs with the dreadful The Sum of Us and the surprisingly wonderful Yesterday; both part of the Douglas County Foreign Film series. Did the latter with my friend Tom Delapa, curator of the ’s film program, the first program we’ve collaborated on since way back when Madstone Theaters was still a viable corporation. Bleh – long story there if anyone cares to hear it one day. Also finished up a series that included titles like Blowup and Aguirre: The Wrath of God - and am prepping a media satire series including Face in the Crowd and His Girl Friday.

Coming up: a series in July of Shakespeare on film that will include, if all goes to plan, Welles’ MacBeth and Michael Almereyda’s Hamlet. Would love to do Stacy Title’s “Hamlet”, Let the Devil Wear Black someday – anyone here seen it?

Anyway – get well soon, Bill, we’ll leave the light on for you.

New content for the week:
Meanwhile, some offshore links of interest:

Incidentally, does it send chills up anyone else's spine that Angelina Jolie renamed the 3-year-old kid she just adopted? I don't remember three, but I'm pretty sure by that point I answered to my name and would've had a major identity crisis if you'd started calling me something else.

UPDATE (03/16/07, 8:15pm): For those of you who get TCM, tomorrow at 12:00pm EST is your last chance to catch Billy Wilder's ultra-bitter, rarely-screened Ace in the Hole (aka The Big Carnival), long considered a holy grail among DVD collectors.

Your feedback is important to us. Please take a moment to tell us what you think of [name of publication]. We will use your feedback to continue to improve our services. When you are done, click [applicable command] to send.

Light line-up; chalk it up to Oscar fatigue.
Next week: Borat (DVD); Melodious Mondays concludes.
Posted by Bill C at 2:42 AM 24 comments: