Just in time for Oscar®:

Which is why Danny Boyle's frivolous, exploitive, essentially unforgivable Slumdog Millionaire is such a blight. Nobody likes a downer, and sure enough Boyle's latest folly is an uplifting piece of crap that combines two of our favourite pastimes: winning the lottery and cultural obliviousness. If Boyle and screenwriter Simon Beaufoy were contemporaries of Leni Riefenstahl, rest assured they would have made a happy-go-lucky triumph of the will piece starring the involuntary residents of Auschwitz in the world's most inappropriate game of "You Bet Your Life". It's the sort of film that wins awards this time of year because it's the sort of film that encourages audiences to applaud themselves for their tolerance of blacks/retards/Jews/fags from the safety of a theatre full of people of the exact same socio-cultural strata.

The trailer for Inglourious Basterds [sic] is now online. Discuss.

I confess I read the script last summer, and let's just say it's fitting that the first title card in the trailer reads "Once Upon a Time in Nazi-Occupied France."

Not sure how I feel, though, about Eli Roth being the first thing we see after the greenband and studio logos.
Posted by Bill C at 5:26 PM 42 comments: 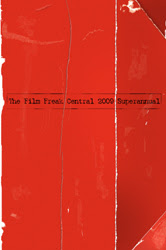 As an anonymous poster seemed caught off-guard in the comments section of the previous thread, I suppose we should make it official: yes, we're putting out a book this year; we even have a projected publication date: June 1st. Since we didn't do one last year, this will collect both our 2007 and 2008 reviews into one thick-ass tome we're calling a "superannual."

I got an e-mail from a reader not too long ago asking if we'd started purposely withholding content for the books, since he'd noticed that our coverage of theatrical releases had sputtered to a near standstill. The answer is an emphatic "no": the truth is, as we get older, our personal obligations grow, and I know it's simply harder for Walter to keep the pace he once did. Moreover, the studios pre-screen a lot more selectively now than they did just a few short years ago, sometimes because they're embarrassed and sometimes because they deem the smaller markets to which we have access utterly negligible. As the professional film critic goes the way of the dodo, perhaps the press screening as we know it will, too.

This is a long way of assuring you there's no conspiracy surrounding the fact that the "Superannual" will sport a good deal of exclusive content we're generating now. Very little that gets written for the mothersite goes unpublished, but as we miss theatrical release dates for one reason or another and films are hastily shunted out of theatres, we often lose a context for bothering to play catch up that the books--as reference guides and journals of record--subsequently provide.

Because the Superannual's going to be a little more expensive than usual--not only to purchase but also to produce (due to the substantially increased page count)--I thought I'd try an experiment: from now until May 1st, anyone who donates $10 or more to Film Freak Central through one of our many PayPal links conveniently located throughout the site will automatically be entered to win a free copy. To make this even more enticing, donors who so choose will be listed as a patron in the book.

More news as it develops. Thanks for your support, and feel free to ask any questions you might have or to make suggestions below.