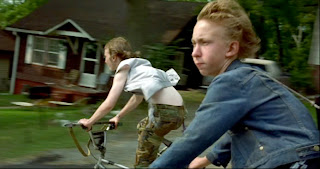 I'll confess, with no shortage of shame, that I had been putting this off for more than three months and am only writing it now because the Sundance Film Festival is starting tomorrow and some may be wondering why I won't be covering it. You see, I have retired from film writing; for Film Freak Central and a little less definitely for my personal website I Viddied it on the Screen. I had been going in this direction for a while, I fear. It’s too difficult for me to get up at five in the morning, work all day, and then come home to write. Furthermore, it became too difficult to justify spending my free time writing. This work is rewarding, but it is work and I guess that I reached the point where the payoff didn’t really warrant the effort. Most of the time, it’s a struggle knowing that my wife was in the other room watching television and instead of joining her I was on the Word Processor trying to sort through my feelings about THE BABYSITTERS.

I tried, but never could figure a way to balance work, family, and this. But the actual cataclysmic event was being accepted into a part-time Master’s program for social work. I’ve always seen film criticism as kind of a romantic dream job, not all that different from wanting to be an actor or director actually. Or a painter or novelist. Social work was kind of a synthesis between that romance, the social worker is at heart a kind of bohemian after all, and some kind of grounded pragmatism. No, it doesn’t really pay all that well, but it IS a real career. But social work really isn’t a compromise for me. All those years I covered Sundance, I came to realize that the people I was really jealous about weren’t paid film critics, but LCSWs. After only one semester, I’ve realized that this isn’t even just a career for me. It’s making feel... whole in a way that no other career ever could. When I die, I don’t know if I will look back on this life as being one of accomplishment. But I do know that I will be able to say that I was there when other people were at their worst , I was there when I was at my worst, and I never hid from any of it.

Maybe that was what I was trying to get at in writing about movies. I was trying to be honest and develop a real set of values that spoke truthfully of my own feelings and attitudes. And maybe I felt that I wasn’t getting anywhere because I was dealing with the shadow of reality instead of the reality itself. That’s just my best guess at this point. You could probably argue me down from it.

I feel pretty confident in saying that Korine and Morrissey have a more accurate understanding of poverty than DeSica or Rossellini. It’s not a tragedy, it’s a tragicomedy. To some extent, it’s a cartoon. There was one boy I worked with that I don’t think I will forget. He was a tall, skinny, “African-American” was lazy eyelids and big donkey teeth. He was always talking. He talked so much that you could see white stuff form in the corners of his mouth. He would ask female staff if they “had any black in them” and said that he was going to go into porn because you don’t need to be good looking you just need to be well-hung. When the patients were allowed to make their own pizza he asked for one with chicken wings. At one point he asked me if “Willy Wonka and the Chocolate Factory” was based on a true story. I am not making any of this up. None of it. I occupied the same physical space as this person. Am I racist for noticing him? Obviously, he is not representative of all black people and obviously he is an outlier. But I tell you that he exists and I’m not going to pretend that he didn’t exist. I wonder though, maybe it’s not political correctness that keeps people from acknowledging his existence. Maybe most people aren’t very film literate and don’t understand the tradition that he comes from or they haven’t learned how to regard other people as abstractions. See, I don’t really know. I’m still working through this.

This really does feel like I’m breaking up. I have written about movies for almost half my life and it’s hard to think that I’m really giving it up. It’s been part of my life for so long and I don’t think that it will really ever fully get out of my system. These last three months I’ve felt the itch quite a few times, but I’ve notably never quite worked my way to scratching it. I think this is all for the best.
Posted by Alex Jackson at 6:15 PM 18 comments: