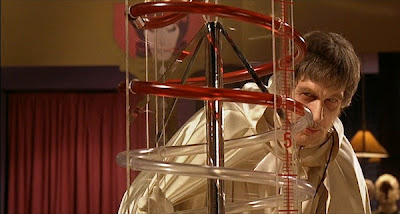 Nobody ever dresses up as Dr. Anton Phibes for Halloween, and I need an explanation of why that is. Underexposure? An allergy to camp? The death of the UHF groovy-movie marathon channels? Whatever, the man needs more respect. He demands it. Or he will set a plague of boils upon thee.
The Abominable Dr. Phibes (1971) is a great helping of late-period Vincent Price on a ham platter. It's also the rotten little B-horror treasure that foretold at least two mass mainstream successes. And it's a Halloween movie to its marrow, with masks, hooded robes, dark kitsch, deathly allure, and (tasteful '70s) gore. The Doctor of the title -- wealthy polymath, gifted musician, fiendish plotter of deathtraps and riddles -- is a dead man, burned to a crisp in a Swiss car accident as he rushed to the side of his dying wife. Alas, she too would die, despite a nine-person medical team's best efforts. As far as the not-so-dead Dr. Phibes is concerned, their best wasn't good enough; in fact, it was tantamount to murder.
From just this side of the grave, courtesy of the great Sam Arkoff's American International genre factory, Phibes reaches out to destroy those surgeons, syncing his murders with the Ten Biblical Plagues of Egypt. On screen, his victims are consumed by locusts, frozen into mansicles, bitten to death by bats, choked to death by mechanical frog masks, exsanguinated by hot ladies, and impaled with a brass unicorn. No, I don't think that last bit was in the Bible either.
If you can't be arsed to hunt it down and watch it -- and I'm indebted to scholar and genre-film fan Dan Hassler-Forest for my DVD copy -- find an excellent scene-by-scene recap at The Bad Movie Report and a solid appreciation at Mark Bourne's Open The Pod Bay Doors, Hal. But if you've any appreciation at all of David Fincher's Seven or the Saw films, you're missing out on their progenitor. By his efforts, Phibes marks himself as the granddaddy of John Doe (the Seven Deadly Sins vs. the Hebrew plagues) and Jigsaw (psychologically significant deathtraps). Take that legacy for what it's worth ($327 million and $848 million respectively), but acknowledge that mainstream film culture has scraped the strata of schlock and polished the gems there to a new shine.
The Abominable Dr. Phibes is a camp carnival that must be seen to be believed. The antihero is a Phantom of the Opera given new life in a kind of mod Agatha Christie dreamscape, pursued by bumbling Scotland Yard detectives named Trout and Crow (Peter Jeffrey and Derek Godfrey) to absolutely no effect. Humor and horror, intertwined and balanced by former "Avengers" director Robert Fuest, expertly acted by a seasoned star who never once opens his mouth to speak, surprise-guest-starring the great Joseph Cotten as the Final Girl, and speaking elegantly to matters of loss, death, madness, and the survival of love. 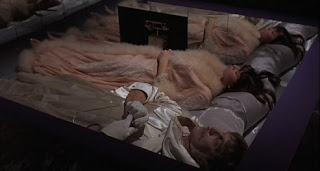 And please don't let that sequel fool you. Dr. Phibes never rose again. The last scene of this movie, with love and death fulfilled, is the last of the magnificent musician-mastermind. AIP is history; Vincent Price is gone. We may see his like again, but we'll nevermore meet Dr. Phibes himself.
Posted by Jefferson Robbins at 10:31 AM No comments:

For those who haven't heard, I went and wrote a scene-by-scene analysis of a little film called The Dark Knight. Would you be interested in an in-depth thematic discussion backed up by thorough research and third-party quotations? In that case, The Faces of Gotham: Myth and Morality in The Dark Knight is available exclusively as an ebook, and can be purchased at Amazon and Barnes & Noble for an all-too-affordable $7.49.

And don't forget--if you don't own a physical e-reader, both Amazon and B&N have free programs for download on the computer/phone/iMachine of your choice.

So give it a read! And hey, if you liked it, spread the word, and write a review on the book's storefront page, whydoncha.
Posted by Anonymous at 5:02 PM 7 comments: