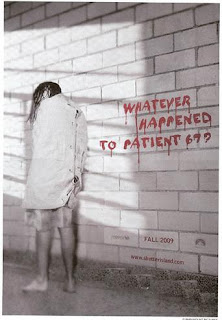 Whoops--thanks to "corym" for the suggestion/reminder. Of course the new Scorsese deserves a talkback, whatever we might have said about it at the mothersite.
Posted by Bill C at 9:38 PM 43 comments: 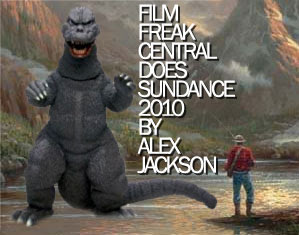 My coverage ended Monday with my capsule of Skateland. I want to share just a few thoughts before I put this to bed.
When people go to a film festival like this what exactly are they hoping to see? As I mentioned before, the least exciting films (Obselidia, Smash His Camera) tend to be the hardest to get into.

When I saw Memories of Overdevelopment the theater was only half-full and a few people left. After the show was over, someone who left asked me how I could have stayed through that "horrible film." She explained that it was pornographic and anti-American. Pornographic? OK. But anti-American? Since when is that offensive? I'm always intrigued when I hear that something is anti-American. I suppose it's because I see America as being so pervasive that I can't readily conceptualize of a culture that actively rejects identifiably American traits. Like, if you're not American, at least a little bit, then what are you?

Yes iconoclasm isn't necessarily a positive thing, but I guess that's the point of the movie. The fascination is in the way it legitimately devalues a core American principle-- our freedom of expression, and finds it wanting when compared to the Communist propaganda of Cuba which at least had a purpose. Memories of Overdevelopment isn't a fun movie, but for most of us it's going to be a challenging one. We don't go to it to confirm what we already know. What was she hoping to see?

When people ask me what the best film I saw was, I reluctantly tell them about I Am Love. The experience that I most value is when you don't really know if a film is good or not. That if it's bad then it's bad in a way that you aren't entirely accustomed to. I don't know what would be worse, if people ended up loving I Am Love (Jonathan Romney of The Independent in London selected it as the best film of 2009) or if they ended up hating it, like the audience I watched it with seemed to. (The person behind me tried to disguise his repulsion with some kind of nonsense about the twinning of Vertigo.)

There's a problem when people can't recognize absurdity. 2006's Into Great Silence was recieved in solemn tones and it's going to go down as the kind of movie that everybody knows they should see, but won't. But if you're not receptive to the absurdity of it all, if you can't look at the thing from a 45% angle and see a laughably pretentious piece of shit, then you aren't truly experiencing it. What's the point of watching a masterpiece that you are already convinced is going to be a masterpiece? Shouldn't there be some kind of cynicism for it to work itself against?

But it's just as much a problem when people can't appreciate absurdity. When they equate everything that produces a powerful but crude visceral reaction or alienates them or makes them feel uncomfortable with "bad." Precious was a case where I wasn't sure if what I was seeing was good or bad. I knew that I hadn't seen a film quite like this before, but I knew that that wasn't necessarily praise. Is one's initial response always the best response? I've probably said that it was before, but movies like Precious and I Am Love (and to a lesser extent, I guess, Memories of Overdevelopment) get me to question that. I feel like there's something kind of complicated going on here that I need to chew over and analyze after the fact. (Neither of these films are subtle, but they sure as hell are complicated.)

Does whispering something make it more truthful than shouting it? Does subtly illuminate the issue more so than melodrama? I guess it would be fair to ask the inverse of those questions, though I'm not sure that you can answer "no" both ways.

This gets me thinking I'm finally succumbing to O'John Landis and differentiating between good and like, though not in the way that he wants me to differentiate betweeen them. How's that for frustrating?!

"Like" is the term that's scientific and objective. We all "like" the same things, because we are all hard-wired to find pretty much all the same stuff attractive. "Like" is all about style. "Good" is the subjective term. It's about whether or not something alters, informs, or possibly substantially confirms our outlook toward the world. I suppose that would mean I would stand Precious up as a "good" movie, but I'm not sure that I like it. This doesn't help me with I Am Love however. I'm not sure if I like it, but I'm still unable to tell you if it's a "good" movie either.

Just trying that on for size.

I definitely "like" Me, Too and Skateland, though and I think they might be pretty good movies, too. They're smooth and easily digestable, but they get at something. It's possible that my definitions of "like" and "good" aren't going to work because it's difficult to "like" something that is "good". Edification might necessarily be a painful process. I'm cautious about overpraising them simply because there's not a lot of friction there, not a whole lot to gnaw on. But if they are distributed nationwide and audiences and critics end up rejecting them, then I don't know man. Rail against conventionalism too much and you lose touch with the movies.
Posted by Alex Jackson at 10:52 AM 27 comments:

Professional Commentary on the Oscar Nominations

Best Motion Picture of the Year
Avatar = inevitable
The Blind Side = barf
District 9 = anything but The Hangover
An Education = lucky
The Hurt Locker = yay
Inglourious Basterds = big yay
Precious: Based on the Novel Push by Sapphire = Oprah
A Serious Man = rent Barton Fink
Up = sadly inevitable
Up in the Air = yawn

Best Performance by an Actor in a Leading Role
Jeff Bridges for Crazy Heart = lifetime achievement award
George Clooney for Up in the Air = male Oprah
Colin Firth for A Single Man = barf
Morgan Freeman for Invictus = yawn
Jeremy Renner for The Hurt Locker = interesting, but dude's a TV actor at heart

Best Performance by an Actress in a Leading Role
Sandra Bullock for The Blind Side = ROTFLMAO
Helen Mirren for The Last Station = never saw
Carey Mulligan for An Education = can do better than Shia LaBeouf
Gabourey Sidibe for Precious: Based on the Novel Push by Sapphire = and all I got was this lousy T-shirt
Meryl Streep for Julie & Julia = telegraphed

Best Performance by an Actor in a Supporting Role
Matt Damon for Invictus = wha?
Woody Harrelson for The Messenger = yay
Christopher Plummer for The Last Station = like you've seen this movie
Stanley Tucci for The Lovely Bones = uh...no.
Christoph Waltz for Inglourious Basterds = they've already engraved the plaque

Best Performance by an Actress in a Supporting Role
Penélope Cruz for Nine = WTF
Vera Farmiga for Up in the Air = sexy beast
Maggie Gyllenhaal for Crazy Heart = hand a mirror to a narcissist why don't you
Anna Kendrick for Up in the Air = yay
Mo'Nique for Precious: Based on the Novel Push by Sapphire = inevitable

Best Achievement in Directing
Kathryn Bigelow for The Hurt Locker = yay
James Cameron for Avatar = Bigelow's bitch
Lee Daniels for Precious: Based on the Novel Push by Sapphire = lucky nobody saw Shadowboxer
Jason Reitman for Up in the Air = barf
Quentin Tarantino for Inglourious Basterds = yay

Best Writing, Screenplay Based on Material Previously Produced or Published
District 9: Neill Blomkamp, Terri Tatchell = barf (sorry)
An Education: Nick Hornby = whatever
In the Loop: Jesse Armstrong, Simon Blackwell, Armando Iannucci, Tony Roche = yay
Precious: Based on the Novel Push by Sapphire: Geoffrey Fletcher = that's gonna be one long-ass nomination to read off the teleprompter
Up in the Air: Jason Reitman, Sheldon Turner = finally, recognition for the guy who wrote the remake of The Longest Yard

Gonna stop before we start getting into categories where I've only seen one or two nominees. Also who cares.

Oscar Predix for the Four Majors

These are educated guesses based on science and psychic powers granted me in a lightning storm. Bask in my clairvoyishness tomorrow morning, y'all.

Best Picture
Avatar
The Blind Side
An Education
The Hangover
The Hurt Locker
Inglourious Basterds
Post Grad
Precious
Up
Up in the Air
Posted by Bill C at 9:11 PM 8 comments: