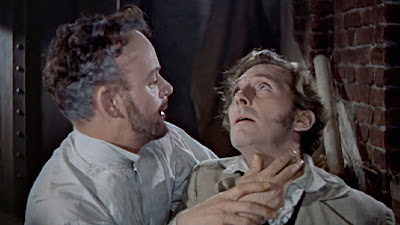 The man who made the monster was gay. This is known to any student of James Whale's Frankenstein (1931), or anybody who's watched Ian McKellen's superlative take on Whale as a character in Gods and Monsters. But it was The Curse of Frankenstein, the movie that established Hammer Films as the preeminent horror studio of the '60s, that first employed forbidden sexuality as the life-giving lightning for Mary Shelley's creation.
Terence Fisher's movie erupted in 1957, in glorious "Eastmancolour" that put a new sheen on the story's blood and viscera. The frightfully mature young Victor Frankenstein (Melvyn Hayes), recruits scholar Paul Krempe (Robert Urquhart) to be his in-home tutor, and the two engage in a years-long, passionate pursuit of knowledge ... during which time, Victor ages into Peter Cushing. Krempe is delighted when they're able to reanimate a dead puppy, but for the promethean Victor, creating human life — reproduction — is the goal. Krempe, the victim of an intellectual seduction, plays along. 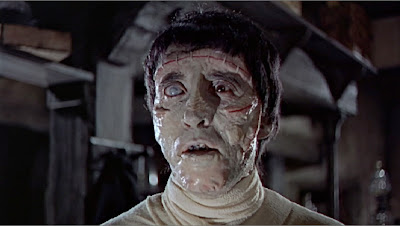 The fruit of their union is the deformed and violent Creature (Christopher Lee), an unnatural offspring to be caged, shunned, and if Krempe has his way, exterminated. Frankenstein will hear none of it. He constantly lures Krempe back into his experiments, reminding him all the while of his complicity in the original misbegetting. He ignores his betrothed, Elizabeth (Hazel Court), in favor of his Creature's care and feeding — even on their wedding night.
Frankenstein does have one, perfunctory heterosexual affair, with housemaid Justine (Valerie Gaunt). But he treats her with worse than contempt, and ultimately feeds her to his homunculus. In killing Justine, pregnant with Victor's baby, the shambling child-beast also cuts off his creator's natural line of descent. Whelped by two men behind locked doors, the Creature by his very being threatens the social order of his sires.
Throughout, Krempe struggles to disentangle from Victor, hoping his indiscretion can be put behind him. He attaches himself to Elizabeth, and bars Victor from disclosing the Creature's existence to her. "Her mind would be incapable of receiving such a shock," he claims. Perversion must remain locked in the attic. The psychosexuality of Curse is a repressive and frightened kind, a mesh of the Victorianism of its setting and the post-Freudianism of the '50s. It hates itself for wanting what it wants, and fears the results of getting it. Krempe is led astray by an alluring younger man — he's a victim, not a deviant, no, never that. Indulgence of the "curse" gives way to monstrosity, and the abomination that arises will take away all that we love.
We think of this movie and remember only Cushing and Lee, driven father and monstrous son, but their relationship is far from the story's center. Indeed, the final fracture is not the requisite "destruction" of the Creature, but Krempe's fatal break with Frankenstein, when he sashays off with his friend's long-suffering wife. She, by the by, is swaddled for this scene in a furry, symbolically rich garment best described as "labial." 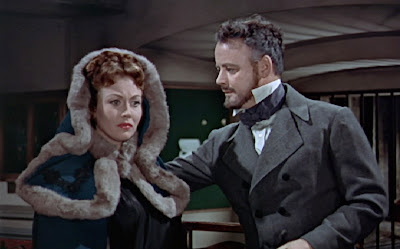 Horror, as Dorian Wright points out in his excellent essay on Fright Night, has always offered a comfortable home for gay themes — buried, save in rare instances, in layers of code and misdirection. The further back in time, of course, the heavier the layers. I don't know how much credit to place at the doorstep of Fisher, Hammer's go-to director for much of the '60s, or that of writer Jimmy Sangster. Both men would help to greatly sexualize the classic movie monsters in their Hammer reinventions. It's tempting to call The Curse of Frankenstein revolutionary, but only insofar as it allowed its self-despising subtext to swim so close to the surface in 1957. This was not art raging against the closet — this was the closet, packed full to bursting with the monsters we'd made.
Posted by Jefferson Robbins at 11:25 PM 4 comments:

Where the Wild Bullet Points Are 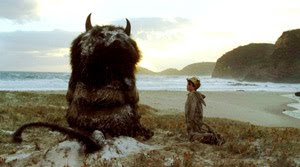 Opening day of Where the Wild Things Are was once so far away that it seemed theoretical, but here we are, and Walter's review is up, and since we generally hold talkbacks for the dork event movies, have at it.

Some other, random talking points:

Labels: Apropos of Nothing, can of worms, Friday Talkback, The Film Freak Central Annual(s), TV 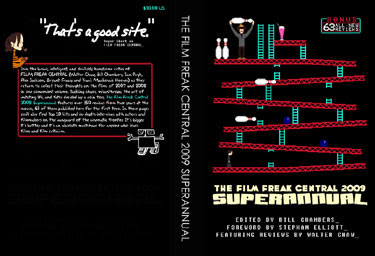 I realize most of you won't read this 'til you're back at work tomorrow, but the option to purchase "The Film Freak Central 2009 Superannual" just went live.

As I mentioned way back when, because this book nearly doubles the page count of our previous Annuals, we had to charge a higher price for it. It's $30. I imagine if you wait a few weeks for it to show up at Amazon, they'll shave a few bucks off, but if you want to support the site, we get the biggest kickback when you buy it through Lulu, our publisher--who, by the way, are an extremely reputable online retailer. (That link again.)

"The Film Freak Central 2009 Superannual" includes all our reviews of 2007's and 2008's theatrical releases, plus all our interviews and Top 10 lists from the same two-year span, topped off by a foreword from Stephan Elliott, director of The Adventures of Priscilla, Queen of the Desert as well as the recent Easy Virtue.

I hope you'll consider adding it to your shelf. By the way, Julia Buck, you are the winning Patron and your complimentary copy is on the way. My thanks again to everyone who donated in the Superannual pledge drive; your names are in print as promised.

Look at it this way: where else in print are you going to find praise for Mr. Magorium's Wonder Emporium alongside a pan of Once? I mean, really.

UPDATE: Thrilled with the response so far. I'd be remiss if I didn't add that the 2005, 2006, and 2007 Annuals are each still on sale--lots of material in those books you won't find online.

UPDATE (10/11/09): Reader Vincent informs us that by entering the coupon code FALLREAD you'll receive 10% off your purchase of the book! Whaddya waiting for?
Posted by Bill C at 5:26 PM 50 comments: 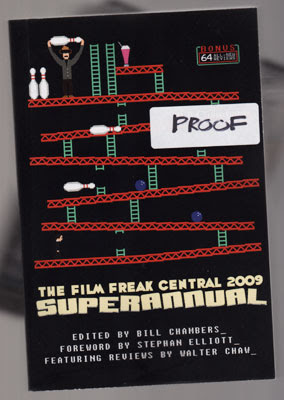 I am quite pleased with it, but need to make a few minor adjustments. More details to come, including the name of the winning Patron.
Posted by Bill C at 8:20 PM 3 comments: