Where the Wild Things Will Be

This is a seriously beautiful trailer. I can't wait.
Posted by Bill C at 3:46 PM 18 comments:

by the way, RIP 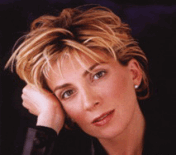 I know I didn’t think very much about Natasha Richardson after I chatted with her for about 45min in 2006 – I wasn’t obsessed, though, like a lot of people, I was smitten. I remember that she had some tea from a large silver pot provided by the hotel, and that she answered her telephone and apologized to me, explaining that her husband was in state, fishing, and that she was to meet him later. I remember wishing I could talk to him, too. I dug out the tape of that interview tonight after hearing that she’d died – and there she was – soft-spoken, elegant, lovely. I didn’t listen to much of it.

I remember that we talked a lot about our children before our interview proper; about how they were the same spacing in age and her telling me how it was so wonderful a gift to give a child a sibling. I’ve thought that thought a lot as I watch my kids play. I know what a comfort it was to have a sister when my father passed away. There’s no one else on the planet, at that moment, that knows exactly how you feel without having to compare notes. At the moment you’re the loneliest, see, you’re not alone.

She asked to see a picture. She was a beautiful person.
Posted by Walter_Chaw at 1:00 AM 3 comments:

I Am Curious CMYK

Have you read my review of The French Connection Blu-ray yet? You might want to take a moment to skim it if you haven't been following the controversy surrounding the disc.

Alex already provided an illustrated example of the picture's own retiming in the previous thread, but for the fuck of it, let's take a look at how a couple of films would be affected by the 'Friedkin process.' This isn't satire, by the way--I followed the recipe outlined in the featurette "Color Timing The French Connection" to the best of my abilities. Are the differences "subtle," as Friedkin claims? More to the point, do you dig the pastel look, or are you suddenly grateful for all that Friedkin hasn't directed? 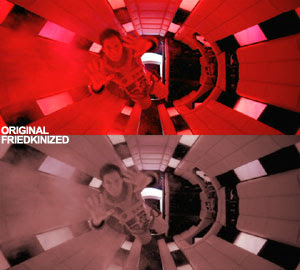 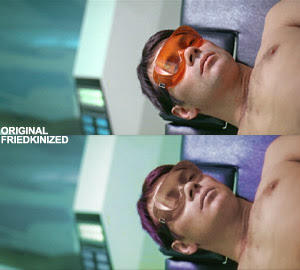 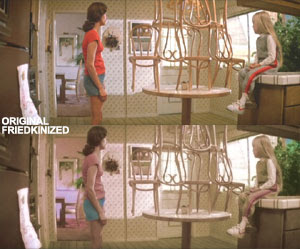 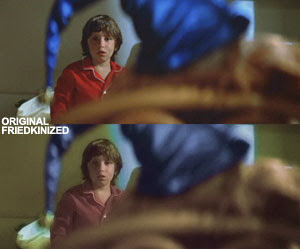 Oh, and one last Watchmen thing: Sam Hamm's draft of the screenplay recently showed up online, and those who found the Zack Snyder film ideologically muddled would do well to peruse this adaptation, the first Watchmen script to be commissioned: with studios now fearing the wrath of fanboys over the most minor deviations from canon, its irreverent treatment of the source material elicits nothing less than a feeling of culture shock. Hamm, of course, wrote the Tim Burton Batman as well as the hilariously awful first draft of its sequel. Bruce Wayne's big dilemma in that one? What to get Vicki Vale for Christmas! 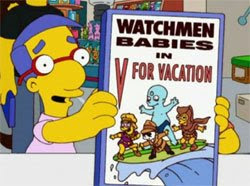 An official Watchmen talkback seems moot in light of O'John's post but feel free to continue the discussion we've been having. Because the cat's out of the bag all over the place, though, and to preserve Walter's delicate modesty, I wanted to take this opportunity to let you know that our Mr. Chaw appears on the upcoming DVD/Blu-ray release of Synecdoche, New York. 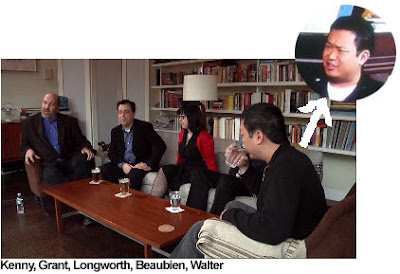 Boy, does he. The 40-minute featurette, titled "Infectious Diseases in Cattle: Bloggers Roundtable", finds Walter and four other online critics--Andrew Grant of FILMBRAIN, Karina Longworth of SPOUT, Chris Beaubien of SCREENHEAD, and Glenn Kenny of SOME CAME RUNNING--discussing the film in-depth. The piece was shot in a Kaufman-esque Tribeca loft this past December, and I've been dying to blab about it since but bit my tongue for fear of jinxing the outcome. Can you conceive of a more fitting movie to mark the occasion of Walter's/FILM FREAK CENTRAL's debut in a DVD supplement?! Making this even sweeter, the great Tim Lucas just called it "one of the most engaging and intellectually stimulating DVD supplements I'd seen in quite awhile" in a comment posted at SOME CAME RUNNING; can't wait to read his fleshed-out thoughts in the pages of VIDEO WATCHDOG.

And now back to Watchmen. Have you seen this, by the by? (Follow the link and click "Pop-Up" under "WATCH THIS MOVIE!") Funny shit--and, as a child of the '80s, it definitely resonated with me. Still, it's symptomatic of a remix/sample culture for which my tolerance is steadily weakening; pop will eat itself, indeed.

Whose Side Is Time On?

I assume Bill was planning an official Watchmen talkbalk, but I thought it was important to have one a few days before the film is released. Right now, if you haven't given up on the project, you're probably at your maximum level of anticipation. This is the most interesting of all possible Hollywood adaptations, because its source isn't even a little bit stupid and yet contains the kinds of scenes that scream blockbuster while having a structure that many consider unfilmable. If there's any time to vent spleen about what you need in a Watchmen adaptation, or even better, what you think you need before you know exactly what you're going to get, this is the best of all possible times.

In order to do this properly, we must make liberal use of spoilers, but to be cautious, I won't use any in this initial post. The eye notices the strangest things by accident. And yes, Bill, I still haven't seen a Watchmen trailer, but I have seen one commercial.

In the past few days, I've been reading a bunch of Alan Moore interviews online. A Wired piece, recently linked to by IMDb, was particularly interesting. Already skeptical of the idea that artists are the most qualified to understand their own art, I couldn't get past Moore's mantra that Watchmen is unfilmable, or even the more esoteric view that its meta-comic construction makes cinematic adaptation pointless. Joss Whedon even said, "It's a comic book about pop culture as viewed through a comic book, so I didn't see the point of making a movie." Well, ok, but Bram Stoker's Dracula was basically the Blair Witch of its day--horror by way of primary document. But would it have made sense to criticize adaptations of Dracula for not following the structure? Is the world of the fiction interesting without the structure, without the theory? In the case of Dracula, and of course in Watchmen, I'd say it is. And why the hell can't a movie be about pop culture as viewed through a comic book? It's certainly less obvious than just making another movie about pop culture as viewed through a movie.

Let's say for now that it's filmable. I mean, fuck, it's coming out Friday. So what are the obstacles in adapting Watchmen as a Hollywood picture? Effects, structure, and tone.

Twenty years ago, the effects would have been a pain in the ass, but these days, if you have enough money to throw at the problem you can do pretty much anything you want. You still can make stupid decisions, but I don't doubt that Dr. Manhattan will be very, very blue.

Twenty years ago, the structure wouldn't have been as much of a problem, but these days, if you have enough money to throw at the effects, you aren't allowed to play with the structure. I don't care if the little excerpts and documents at the end of the Watchmen books were originally intended to be there. There was a time when I would rather have seen an Under the Hood feature than a Watchmen feature. In fact, imagine a movie about the Minutemen that ends with the correction, "God exists and he's American." Still, the flashbacks are so carefully planned in the books that you have to intentionally screw them up, so there's even hope--up to a point--for structure.

The tone is tricky, though, because it shifts based on the point of view--sometimes grim, sometimes nostalgic, sometimes just sad. Snyder's completely capable of failing to find the right tone. He even said about his next film, "I wanted to make an action movie that's just, like, crazy and sexy and dark and just cool. I don't want any rules, and I don't want any pedigree. I just want to go crazy and shoot some shots that make me remember why movies are badass." That's right, the Watchmen director fondly remembers his younger days, when making movies was significantly more badass--unlike Watchmen, which is really, once you get down to it, not badass. So it's safe to say that I'm nearly afraid on a Brett Ratner level. But at the end of the same interview, Snyder says, "The thing is, you can get crucified on the same cross that you worship." I don't think Ratner would care about getting crucified.

As likely as it might be to screw up effects, structure, or tone, they're not the real problem. It seems banal, but the real reason to think Watchmen is unfilmable is simply length. In other words, it's the same reason it's hard to film any novel--density. Hollywood doesn't want a movie to be more than 160 minutes, because well, Gone with the Wind came out a long time ago, or because Godfather 2 was boring, or because Titanic will never make any money, or something. With 600 minutes to work with, there are some novels you still couldn't adapt perfectly. Who, deep down, really thinks Peter Jackson made all the right decisions about the pacing and tone of The Lord of the Rings? The really sad part is that you could make a definitive Watchmen in four hours or so, but we won't have that option.

What do I need to see in the Watchmen movie? I need a Rorschach who seems crazy because of calm determination and not because he's a badass. I need some time spent understanding the three eras of heroes. I need Dr. Manhattan trying to mindfuck us on Mars right in the middle of a murder mystery. I need to know that Tales of the Black Freighter will fit in properly to an extended version, even if it doesn't make it into this one. I need Nite Owl to be impotent and then cured right after the ramp of his ship fucks a window. I need the ending to feel less rushed than it does in the book.