Whoa is Me Redux

Will the poster by the name of "Dan C." please step forward and claim your prize? (E-mail me - billc@filmfreakcentral.net.) Life's too short to drag this out any further. Those caps came from Witchfinder General, The Butcher Boy, and Road Games, by the way; surprised no one got the third one, since I assume the film is quite popular around here as an '80s horror movie starring Jamie Lee Curtis. (I hadn't seen it, ironically, until excerpts from it in the terrific Aussie exploitation doc Not Quite Hollywood inspired me to rectify the situation. Truthfully? I was kinda disappointed, especially as an ardent fan of Richard Franklin's other Hitchcock shrine, Psycho II.)

One other bit of business before I scram: Walter Chaw's interview with Charlie Kaufman just went up at the mothersite, and I'm tempted to say it's the best thing we've ever published. Not to overhype it. And talk about landing the whale--where do we go from here?
Posted by Bill C at 7:15 PM 17 comments:

I have a Blu-ray copy of The Ultimate Matrix Collection I'm willing to give away to the first person who correctly identifies the sources of all three screencaps below. North American residents only, please.

Dunno when I'm gonna get around to reviewing the damn thing, for what it's worth, but in short it's demo material through and through, just a great showcase for the format. And you actually get The Animatrix in full 1080 for the first time on next-gen.

Also wanted to take this opportunity to go on record about the status of this year's book. While there won't be a Film Freak Central 2008 Annual, there will be a Film Freak Central 2008-2009 Annual, which we're hoping to release in the first quarter of next year. It's going to cost a bit more but it will also be twice as thick. (That's what she said. (Speaking of which, how great was Thursday's "The Office"?)) More details to follow. 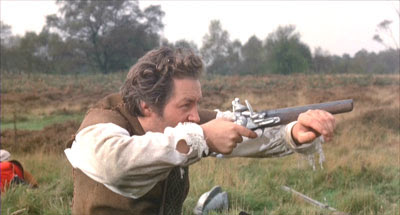 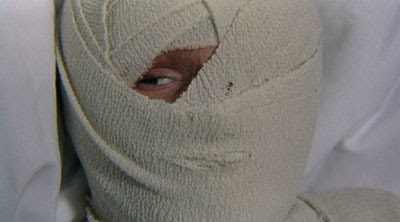 So, uh, who here has seen Michael Moore's latest film Slacker Uprising, graciously offered as a free gift to residents of the U.S. and Canada? Spoiler alert! It's about how Michael Moore singlehandedly won the youth vote for John Kerry in the 2004 Presidential election. (You're welcome.) It really is a sight to see, so watch it for free while you can--formerly, and more appropriately, titled Captain Mike Across America at last year's TIFF, Slacker Uprising may be the film that cements his long-term relevance to the art world and emphasizes his newfound irrelevance to everything else. You want a movie that can definitively link Moore to Leni Riefenstahl--so definitively, in fact, that it makes the comparison embarrassingly obvious? Well, here it is: a 62-city rock-the-vote tour that finds Michael Moore energizing enormous, faceless crowds of "slackers" (read: college students) who seem less interested in his message than his presence, which is given extra weight by fawning introductions from Joan Baez and R.E.M.

Predictably, Moore also takes the opportunity to a lodge a hypersensitive defense of Fahrenheit 9/11, wagging a finger at the media for their own propagandistic tactics and refuting the guys who call him a communist without seeing his work. Apparently, Moore tells us, 44% of polled Republicans who saw the movie felt that it offered a fair portrait of the President. In presenting that little tidbit, it seems brazenly prickish (and, it goes without saying, enormously self-centered) to dare right-wingers to picket his tour, and to keep his camera solely focused on the lunatic fringe--the folks who admit their ignorance to the issues but will vote for the guy who has a personal covenant with the man upstairs. I realize that it can be more than a little disconcerting--this idea that no matter how batshit insane or ridiculously uninformed you are, you can vote so long as you're not a convicted felon--but, um, isn't Moore essentially enabling a whole new crowd of scary voters with his indiscriminate bid to get warm bodies into the polling booths? Fight fire with fire, I guess, but I don't know if it's possible to see Moore's crusade against George W. Bush as anything less than a personal vendetta: it's not specifically about the war or the 2000 vote anymore--he wants to hurt this motherfucker, bad. The so-called Slacker Uprising chronicles nothing of the sort; it's just a paean to its own creator and a sissy-slapfight waiting to happen. I'd say that Moore just wrote his own pink slip with this film--but let's wait for the election, and Oliver Stone's W., before we can come to any concrete conclusions.

Imbued with a slightly masochistic desire to watch documentaries about self-centered jackasses, I went to see Religulous over the weekend. Honestly, there isn't a whole lot to say about it, except that I wish that Bill Maher would spend more time talking about the bizarre attempts to reconcile faith and science and less time trying to discredit their interviewees with sarcastic subtitles as they fumble for the right words. In fact, let's say that I wish that Maher had spent more time implicating himself as a member of the human race, instead of placing himself smugly above it--what else can you say about a man who says that he thinks you're smart and rational until faith enters the equation, upon which time he declares that you have a neurological disorder? Oh sure, he drops little hints of his own brushes with faith and religion, but even as a kid, he was too smart for that shit.

If history has taught us anything, it's that fear and passion have a fucked-up effect on the human psyche, but what Religulous taught me is that we can avoid obliterating ourselves with a self-righteous mushroom cloud if we were more like Bill Maher; if we were to adopt his sense of all-encompassing doubt and, perhaps, his messiah complex along with it. Dare we imply that arrogance is one of the reasons why religion has helped steer us onto the path of self-destruction? "Everyone in America needs to see this movie," someone behind me remarked as the end credits rolled, and it's that kind of reaction that I fear most from Religulous, this belief that watching it will endow each and every one its viewers with some mystical sense of self-awareness--more likely, it will convince its own holier-than-thou choir to adopt a sense of apathy to world events, convinced that they're not a member of the unwashed masses. I mean, I dunno, what do you think: when you're discussing something as ostensibly universal--yet so intensely personal--as faith, how distant can/should a director/host remain from the action?

I tried my damnedest to sneak into An American Carol shortly after I saw Religulous, but no such luck--while seventeen of the multiplex's nineteen theaters could be found on the second floor, An American Carol was on the ground floor alongside Nick and Norah's Infinite Playlist, presumably because they are the films at highest risk to be populated by moochers. You win this round, fall releases not screened for critics! So I pays my moneys and watch the movie with seven other people present in the theater--two of whom walk out about a half hour in. I somehow managed to stick it out and, frankly, I'm still waiting for David Zucker to pop up out of nowhere and throw a pie in my face.

There's one particular scene that leads me to that flabbergasted conclusion: Before a pair cops can search a couple of middle-eastern guys, a cadre of literal zombies representing the ACLU barge in, moaning about the Fourth Amendment. ("I'm premenstrual!" the token female zombie adds. Ha ha! Bitches, man--am I right?) "Thank Allah for the ACLU," one of the Middle Eastern guys mutters, shortly before George S. Patton (Kelsey Grammer) jumps in and blows them apart with a twelve gauge. We never actually get to see the bomb in question before Patton blows them to kingdom come, and... just... no. You can't possibly expect me to see this as even remotely acceptable. My own sense of doubt tends to take over during moments like these, attempting to convince me that I've missed something important. Call it cathartic fantasy if you want, but no one can possibly be this ignorant, no one can be this much of a balls-out hypocrite.

Could it be that An American Carol is actually a subtle, complex satire of partisan bickering? Hell, there's even a scene in which Dennis Hopper, playing a federal judge, takes a gun and fires wildly into a crowd of those ACLU zombies before they can take the Ten Commandments off the wall and--gasp--enact gun control! Shoot 'Em Up was a little too obvious to be truly effective, but I was willing to play along, and I thought I sensed something along those same lines here. Patton takes anti-American filmmaker Michael Malone (Kevin Farley) through vital moments in world history to demonstrate where war has been necessary (the Munich Agreement and a hypothetical modern America where slavery was never abolished)--but wait, I thought the George Clooney analogue was there to demonstrate how we shouldn't belabor the past, what with his irrelevant films about Nazis and Joe McCarthy! Malone expresses ignorant surprise that members of the Military went to college--but wait, I thought colleges were hotbeds of anti-American subversion! And so on.

Slacker Uprising more or less confirms that Michael Moore is an almost obscenely easy target, too obvious to ignore. Between the cheap fat jokes, An American Carol attempts to gain mileage by mocking the very idea that he is a documentary filmmaker--not because he routinely fudges the facts or that he's relentlessly self-aggrandizing, but because nobody watches documentaries, and maybe he's just not good enough to make feature films. Finally, after Malone undergoes his Dickensian conversion, he becomes a patriotically positive filmmaker who finally gets to make the narrative that he apparently always wanted to make. I want so badly to believe that it's all an elaborate prank--any film that acknowledges Riefenstahl as an integral building block of the Third Reich just has to be aware that the moving image carries immeasurable power in all its forms. But that little coda finally forces me to abandon any thoughts that the joke is on anyone but me: enforcing the same old ass-backwards belief that movies only exist as an escape, and that feel-good fiction is infinitely preferable to a possibly bitter reality. Maybe it's just too frightening to take seriously at first, wondering if anyone could believe that An American Carol is telling it like it is--almost as frightening as the possibility that Sarah Palin could be anywhere within twenty feet of any big red buttons.

Coming soon from yours truly: an incendiary yet logical interview with Ballast director Lance Hammer, and a leap back onto a certain wagon of insanity that I've owed you all for way too long.
Posted by Anonymous at 1:52 AM 24 comments: