It was actually a set of closing credits that gave me the idea for my contribution to FFC's Top Ten List project--the very final sequence of Romero's Dawn of the Dead, to be exact. Thinking about how that film's end titles entailed the most eloquent, concise, and chilling example of the film-long equation of zombies with dead-eyed consumerism, the idea of compiling a list of other great thematic "thesis statements" became an attractive one. Ultimately, I decided to head for the opposite end of the chronological spectrum, because while the best opening title sequences establish and epitomize their films' worlds and intentions, they also represent the screenwriters' and filmmakers' eagerness to snatch up the soonest possible opportunity to subdue the viewer with the elusive magic that is cinema. The definition of what constitutes a "title sequence," per se, will be left intentionally vague for the purposes of this list. Many of these selections are pre-credits teasers, while others are the moments that surround the literal credits--basically that grey area between the studio logos and "directed by."-Ian Pugh

10. Magnum Force (1973, Ted Post)
Sequels don't require the laborious set-ups that original films do--and boy, does the second Dirty Harry film ever know it. As the film begins, we're quite plainly presented with Harry Callahan's familiar .44 Magnum, spread out across a blood-red background. The gun turns towards us and--as Clint Eastwood recites an abridged version of his "do you feel lucky" speech--fires. Call it a simplification of Godard's necessities for filmmaking: all you need is a gun.

9. Bride of Re-Animator (1989, Brian Yuzna)
A good chunk of my admiration for Brian Yuzna's scattershot Re-Animator sequel lies in its opening stinger, featuring the living, disembodied head of arch-prick Dr. Carl Hill slowly floating towards us as he casts a dire warning directed at his nemesis, Herbert West. The last time we saw the dear departed Dr. Hill, his brains were splattered across the walls of Miskatonic University; he won't be formally revived from the dead in this film for another half-hour. And yet here he is, head awake and fully intact, coming at us with a beautifully melodramatic speech in the Bela Lugosi vein. (After all, beyond the obvious Frankenstein connection, Bride of Re-Animator is something of an extended tribute to Ed Wood.) Hill has bent the rules of his own metaverse to once again rise from the grave and make life difficult for everyone. It's the ultimate re-animation.

8. Stop Making Sense (1984, Jonathan Demme)
"Hi, I got a tape I wanna play." The singularly bizarre sight of the crane-like David Byrne jamming to an acoustic version of "Psycho Killer" on a bare stage makes us wonder what he's hiding up his sleeve.

7. Dead of Night / Deathdream (1974, Bob Clark)
Dead of Night earned the right to use Hitchcock's familiar "no one will be seated" marketing ploy by turning the jungles of Vietnam into something dark and supernatural even before Andy Brooks (played by a different actor in the pre-credits sequence than in the film proper) is killed in the line of duty and sent back to Mom and Dad as a post-traumatic zombie. So once the film starts throwing pulsating lights and faraway, ghostly voices at us, it doesn't seem like a leap of logic so much as one step deeper into a void of madness that has already engulfed us. To be honest, the audio alone could almost carry this sequence, as the wails of a dying soldier and the pleas of his doomed friend ("Darren? Darren, Jesus Christ, Darren!") are just as haunting as any other horrors delivered throughout the rest of the piece. With this prologue, Clark implies that his own metaphors may be unnecessary in the harsh face of what was already happening overseas.

6. The Untouchables (1987, Brian De Palma)
Pauline Kael famously called The Untouchables "an attempt to visualize the public's collective dream of Chicago gangsters." I would call its title sequence an attempt to visualize the public's collective dream of the gangster genre as a series of recognizable abstracts. Start with a sepia background and pillars of shadows that vaguely mimic some aspect of the noir aesthetic--maybe the ceiling fan that presides over the archetypal private detective's office, or the Venetian blinds that ominously open and close when he wants a peek at the outside world. They're eventually revealed to be the deep shadows cast by the enormous letters of the title itself, which of course becomes a representation of the purely conceptual heroes from the days of Sam Spade, Mike Hammer, and Robert Stack's Eliot Ness--in our eyes, larger-than-life and, of course, untouchable. Top it off with Ennio Morricone's driving, threatening overture and you're ready for The Untouchables despite that there isn't a single fedora or Thompson gun in sight.

5. Schizopolis (1996, Steven Soderbergh)
The entirety of Schizopolis is something of a gigantic joke on an audience unprepared for the avant-garde, and Steven Soderbergh's intro, in which the man himself takes the stage for a brief explanation, serves as a parodic response to folks who demand cohesion and logic from the likes of David Lynch--finally, somebody can tell me what all of this weird shit is about. But all that awaits such expectations are more frustrations: Soderbergh interrupts his stream-of-consciousness speech with random commands to "turn" and retreat to a different camera angle, and concludes that the viewer's lack of understanding in the film's purpose is "your fault, not ours." It's at once a condemnation of the attempt to rationalize a world of subconscious surrealism and an invitation to play by its rules.

4. The Spy Who Loved Me (1977, Lewis Gilbert)
I can't list my favourite opening sequences without mentioning at least one James Bond film; out of all of them, I choose Maurice Binder's title sequence from my personal favourite of the series, The Spy Who Loved Me. The teaser itself hits all of the familiar marks for a Bond film--and I could probably do without the disco remix--but the surrealistic titles manage to indulge in the typical silliness that comes with the territory (girls on trampolines, fetishized gun barrels) without descending into puerile ridiculousness. Notice how they follow the easygoing flow of Carly Simon's "Nobody Does It Better" while capturing the undercurrent of paranoia in the film's détente subplot: there's actually something self-consciously reckless about how the guns are thrown around here. The vital moment, however, comes when the 007 silhouette knocks over a row of nude women "dressed" as marching toy soldiers.

3. Fahrenheit 451 (1966, Francois Truffaut)
The opening "titles" of Truffaut's Fahrenheit 451 don't feel quite right, as if they were made by someone with only a rudimentary grasp of filmmaking: the credits are read aloud in an indifferent monotone while the camera, armed with obnoxious pastel filters, zooms in abruptly on what appear to be intricate television antennae. It comes from another world, one of illiteracy, artlessness, and suppression--one that's becoming more and more familiar every day.

2. Darkman (1990, Sam Raimi)
I absolutely adore the opening minutes of Sam Raimi's Darkman--the original, superior version of Raimi's overblown Spider-Man 3--because they establish its world of comic book hyper-logic so effortlessly. Raimi kicks things off by filling his frame/panel with a multitude of unique personalities (in the second shot of the film, notice the geek off to the side quickly alternating between popping pills and puffing his cigarette), only to cram more such characters into view a few moments later. Then it proceeds to embroil them all in a manic gang war to determine which band of thugs will serve as the bad guys of this picture. The winners, of course, are the ones whose themes and traits are most consistent with a comic book villain landscape--Robert Durant's penchant to clip the fingers of his adversaries with his cigar cutter; a guy named "Skip" with a machine gun housed in his wooden leg--and those who best prepare the viewer for the fantastic elements that Darkman is about to hurl at them.

1. A Hard Day's Night (1964, Richard Lester)
The Beatles described their experiences with crowds of rabid fans as terrifying--it was apparently the threat of being assaulted with scissors for locks of their hair that finally forced them to stay holed-up in a studio for good. But A Hard Day's Night begins with the Fab Four, just two steps ahead of a screaming mob, running for dear life with great big grins on their faces and concocting silly, makeshift plans to escape. It's a spectacular, hyperactive sequence, one that of course sets the stage for the madcap hilarity ahead. But knowing the truth of it, it also says a lot about masking your fear and pain for the benefit of your audience--willingly feeding into a popular perception that there was something fun and cartoony about the disturbing loss of anonymity that attends worldwide fame. I dare say that it transforms The Beatles' subsequent horseplay into the work of operatic Pagliaccis. Incidentally, the sequence makes for a fine companion piece to the final, live-action sing-along of Yellow Submarine, where the band attempted to exude the same camaraderie when they were actually on the verge of destruction thanks to their clashing egos.

I was invited to speak on national radio this morning about the 30th anniversary of Star Wars and regret that I couldn't make it, as I think a lot of the reflections on this cultural milestone I've seen so far are a bit too clouded by nostalgia to see the Hiroshima-like impact it had (and continues to have) on cinema and the popular culture. I'll be the first to admit that I don't hate the Original Trilogy in and of itself, but can we stop fetishizing these movies already?

Forget all that, though. At the risk of sounding solipsistic, we've got bigger fish to fry...

FILM FREAK CENTRAL actually crossed the first-decade threshold a couple of weeks ago, but I wanted to hold the announcement until I had the stamina to pay a proper tribute.

To mark this occasion, all of us here at FFC--Walter Chaw, Travis Mackenzie Hoover, Alex Jackson, Ian Pugh, and yours truly--have compiled a Top 10 list of our own devising. A new one will surface every couple of days here at the Blog, with mine, the most self-indulgent, coming last. As always, we invite you to critique these lists, suggest alternatives, and just generally do your blog thang.

First up: Alex Jackson with a subject close to my own heart. Take it away, Alex!-Bill Chambers 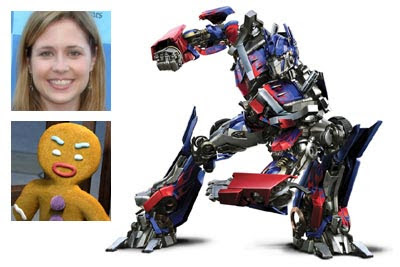 If you're wondering about the spotty transmissions of late, I broke my freakin' arm. Between this and the hernia operation, I hope I've finally shed the cosmic "kick me" sign, though it'll still be a couple of weeks before I'm out of the sling and substantially contributing to the site again. Could be worse, of course--could be "The Office" heartbreaker Jenna Fischer, who recently, gulp, broke her back. Apparently she'll make a full recovery, but nevertheless: get well soon, Pam!

Anyway, we haven't had a proper talkback in a while, so here's a sampling of some recent reviews bound to jumpstart the conversation around here, including a sneak peek at Walter's review of Shrek the Turd--er, Third. There is also this, the trailer for the latest Un Film de Michael Bay, which brings to mind Joe Dante's reason for turning down Batman: because he didn't believe in Batman, he believed in the Joker. From the looks of things, they hired a Decepticon to direct Transformers.
Next week marks a special occasion for FFC; more on that soon.
Posted by Bill C at 4:48 PM 46 comments: