so i herd u liek dark knight?

In case you haven't seen it over at THE HOUSE NEXT DOOR, Keith Uhlich's review of The Dark Knight caused a bit of an uproar with the trolls at Rotten Tomatoes, who apparently spend their days scouring for negative reviews and blasting their authors accordingly. Now, I don't want to sound too dramatic about my own reaction to The Dark Knight--I've seen it three times now, and I'm seriously contemplating four. I pretty much fall in line with the "masterpiece" argument, although to tell you the truth I've been more interested in examining Harvey Dent than in even trying to decipher the Joker. (I really hope that Aaron Eckhart's wonderful performance isn't ignored in the long run of Ledger memorials.) But what I can say at this particular moment is that the film has forced me to rethink my general perspective on superhero movies. I've been meaning to post this beautiful parody of Iron Man for a while now, but I think it's more relevant now than ever:

I stand by the fact that I liked Iron Man: it's a clever political allegory about selfish imperialism, masked as an altruistic act--chronicling the story of a weapons developer who, upon realizing what a bastard he's been, transforms himself into a human bomb in exclusive service to saving face. (My favorite shot of the film, I confess, is when Iron Man Mark I takes a torch to all of the weapons printed with "Stark Industries.") Considering the popular response to the film, however, I suppose what I'm worried about is that not enough people will bother to understand why Irod Bad! is such a marvelous work--it satirizes the typical reaction to summer blockbusters and, moreover, what we expect summer blockbusters to be.

What I'm getting at is that I'm becoming bored with the cinematic promises of the season, that my comic book geek twinge will be fulfilled with every new capes-and-tights picture. While The Incredible Hulk is pretty godawful, I have to admit that I liked the Tony Stark denouement that essentially announced to the world (i.e., those who didn't stay through the end credits of Iron Man) the intention to follow through with an Avengers film. It interested me, anyway--this concept of dropping in these little teasers with each successive Marvel property, alluding to something bigger than all of them. Bigger than a superhero? Preposterous, intriguing. Now, after seeing The Dark Knight (or perhaps more specifically, after seeing The Dark Knight after seeing The Incredible Hulk), I'm just kind of apathetic to the whole thing. The Incredible Hulk was terrible because it was so desperate to please the nerd contingent with loud noises and big motherfuckers pounding the crap out of each other. Everything that you wanted, right? (PAKOO! PAKLOWAWOW!) I do understand why most people don't like Superman Returns, and I also understand the argument that weighty, existential interpretations suck the fun out of superheroes, but I take the opposite stance--that by not exploring them, we're keeping ourselves in a state of arrested development, and we're making superheroes boring by forcing them to conform to our expectations. Nothing wrong with getting excited about a great popcorn flick, but shouldn't we also want to explore why we're attracted to such extreme personalities? How they relate to us? Why we see them as gods? I want to be amazed by superheroes, not pacified by them. I want to believe that a man can fly. The real miracle will be if the Avengers film somehow doesn't end up an incomprehensible clusterfuck.

Such is my puzzlement with the rabid fanboyism surrounding The Dark Knight--captured in microcosm in the comments section of Keith's review. My problem isn't the sputtering, ineloquent anger at negative reviews (which is just all too common on the web) as much as it is the attempt to find out why, exactly, these people are so gung-ho about a film that they aren't willing to defend. Over at THE HOUSE, Travis already pointed out the essential ridiculousness of padding out various death threats and eff-yous with the de facto tagline why so serious, but even beyond that, by using it as some kind of cutesy anti-critical stance you're subtly implying that Nolan doesn't--and furthermore shouldn't--take his own scenarios seriously. How does that work, exactly? The Dark Knight is hardly shy about expounding on the themes it attacks: on very simple terms, it forces you to contemplate whether you would have the strength and moral fabric to stand against the chaotic storm. "It's a comic book, dude - not Tolstoy," one commenter says, and, I mean, Jesus, really? How can we pretend that we're still at that point in time? This is one instance where I simply cannot understand the desire to ignore a critical look at a film, to see it as pure escapist entertainment. Are the questions it poses too big and scary? And even then, if you don't want to think about what The Dark Knight is saying about human nature in relationship to morality, why the fuck do you love it so much, why are you so willing to curse out anyone who disagrees with that sentiment? (I may disagree vehemently with Keith's review, but he recognizes and tackles the forces at play.) Of course it was breathtaking, but surely the singular sight of a semi flipping on its back can't have carried you for two-and-a-half hours.

Furthermore, what can be considered "properly" complex in properties like this? As it is wont to do, the internet is going ga-ga over Joss Whedon's latest eye-rolling circle-jerk, Dr. Horrible's Sing-Along Blog. As ever, Whedon has a keen eye for casting--Neil Patrick Harris' nervous delivery is, simply put, incomparable, and Nathan Fillion is always a delight to watch. But I've always been turned off by the self-conscious cleverness that permeates his work (excessively literal examinations of popular axioms; oh-so-irreverent asides), and it manifests here by rehashing the same level-one sarcasm that passes for subversion in most parodic superhero enterprises--evil laughter as part of a voice lesson; superficial do-gooder he-men imagined as selfish sissies; drastic signifiers like "good" and "evil" relabeled as simple nine-to-fives. And they sing about it and isn't that just the wackiest thing? This isn't much better than the mentality that Irod Bad! is railing against, or what any of the more mind-numbing superhero blockbusters are peddling--simply because it isn't subverting our expectations, it's congratulating us for recognizing what we know about the genre and regurgitating a series of wouldn't-it-be-funny-ifs that we've contemplated countless times before. I don't mean to sound like a humorless prick about it, and I fully realize that there are different audiences and approaches in mind here, but the saga of Dr. Horrible and Captain Hammer just seems kind of jejune when compared to Nolan's Two-Face--a self-aware white knight who always possessed an overdeveloped sense of entitlement and "fairness," whose violent downfall throws into question the very idea of a moral crusade. Sing-Along Blog ends pretty tragically, but it still doesn't take things very far. Simply presenting a supervillain with feelings shouldn't really cut it anymore.

So a simple question: where can we locate a proper balance? Where will Zack Snyder's Watchmen land in this argument?

And, a bonus: where can Nolan's Batman go from here? The Dark Knight's a tough act to follow, and we're quickly running out of viable villains for this enterprise. Eckhart says that he would reprise Two-Face if given the chance, but that would be cheating; and Nolan might not want to do the Penguin, even with Philip Seymour Hoffman--so who's left? My guess is, if Batman Begins is about fear and The Dark Knight is about chaos, then the third film would be about a battle for the mind, and the attempt to intellectually evolve from the primordial soup--so maybe the Riddler and the Mad Hatter would make for good opponents. Particuarly if inspiration is taken from their animated series incarnations: a cerebral egotist and a self-loathing stalker, respectively.
Posted by Anonymous at 3:20 PM 53 comments: 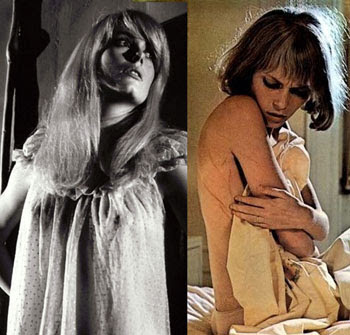 A tip of the hat to Tim Lucas for drawing attention to this at his blog: the British film periodical SIGHT & SOUND recently polled 52 critics or programmers on their idea of a great double-bill and put the results online as a downloadable .PDF. Lucas himself picked Eyes Without a Face and The Manster but admits that in hindsight he wishes he'd chosen A Tale of Two Sisters and The Double Life of Veronique.

I've had some pretty heady double-bills in my day, some by default of my rental choices (Jungle Fever and Barton Fink? Surprisingly complementary--and they both feature John Turturro), some thanks to the auteur-minded programming of rep cinemas (a wearying Roman Polanski twofer of Repulsion and Rosemary's Baby), some by serendipity (with a few hours to kill before a screening of Crumb, I ducked into a Chinatown theatre just in time for a showing of John Woo's Bullet in the Head).

Anyway, the article got me thinking that this hypothetical doesn't have to be the exclusive domain of these cats, many of whom, for what it's worth, will be unfamiliar to readers on this side of the pond. Some of their choices are frankly so unimaginative (The Searchers & Rio Bravo--c'mon, man, try harder than that!) that I suspect we can do as well or better. Let's hear it, then: I give you the keys to a movie theatre and carte blanche to program your own double-bill--what do you choose? And, I guess, why?
Posted by Bill C at 7:59 PM 64 comments:

David Cronenberg and Howard Shore make an opera out of their operatic 1986 masterpiece The Fly.

I was thinking about this flick recently anyway for two reasons:

1. because Guillermo Del Toro's Hellboy II plays like an opera, too, thus unlocking Del Toro's films for me in a different way.

2. because I'm also in the middle of reviewing 1986's Blue City with Judd Nelson and Ally Sheedy, reminding me that while 1986 was one of the best years of film in that decade (and many others - Blue Velvet, Down By Law, The Mosquito Coast, Henry: Portrait of a Serial Killer, Sid and Nancy, Aliens, Ferris Bueller’s Day Off, The Fly, Big Trouble in Little China, Something Wild, Mona Lisa, Night of the Creeps) it also hosted that trilogy of Brat Pack suck: this one, The Wraith and Wisdom.