Apropos of Nothing: "Doc Hollywood" 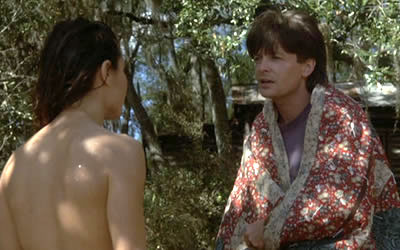 So, the other night Doc Hollywood was on TV. Now, every time Doc Hollywood is on TV, I try to time it so that I happen to channel-surf past it just as Julie Warner is making her Ursula Andress-style topless exit from a sylvan lake. But this time, I decided to keep watching, and...
I actually saw Doc Hollywood a number of times during my Michael Caton-Jones phase. Back then, the Scottish director had followed up the amiable Doc Hollywood with the lovely This Boy's Life and the marvellous Rob Roy, and he made enough interesting decisions--like putting nudity in Doc Hollywood (the film that would essentially inspire Pixar's Cars), or dropping the score for the climactic swordfight in Rob Roy--that he didn't seem to be so completely at the mercy of his scripts, as later films like The Jackal and Basic Instinct 2 revealed him to be.
But Doc Hollywood, in retrospect, already made this abundantly clear. Scripted by the decidedly low-wattage trio of Daniel Pyne (Pacific Heights) and partners Jeffrey Price and Peter S. Seaman (Wild Wild West), the picture coasts on the charm of its actors, including Michael J. Fox (although knowing that he went into production having just been diagnosed with Parkinson's casts a shroud of melancholy over his performance), whose character's braggadocio would be unpalatable without Fox's knack for turning Alex P. Keatons into total softies.
The movie is not without merit as cinema, don't get me wrong. I'm particularly fond of a scene Caton-Jones himself came up with, if I'm remembering the publicity lore correctly, in which Fox and Warner--sounds like a corporate merger, doesn't it?--dance to Patsy Cline's "Crazy": as these would-be lovers lose themselves in each other, everyone around them momentarily vanishes into thin air. Little dashes of magic realism like that would go a long way towards keeping many of today's romcoms out of the ghetto. Still, even as far as these things go, the love story in Doc Hollywood is perfunctory, and there's nothing particularly original or seductive about the town of Grady, which cleanses Fox's soul like a Norman Rockwell enema. It's basically a less oppressive precursor to "Gilmore girls"' Stars Hollow.
What really ruins the movie for me today, however, is the fucking pig. More specifically, it's a sequence where Fox inherits a pig for fixing a patient's toe. (Hey! It's That Guy! Raye Birk plays the patient, making Grady feel at once more cozy and more artificial.) Fox, desperate to get out of Grady, then barters the pig to the mechanic fixing his Porsche, only to learn that Warner's four-year-old daughter is crazy about pigs and would love it if Fox brought his porcine pal around sometime. Fox, desperate to get in Warner's pants, then tries to buy back the pig, but discovers the mechanic has turned around and sold it to the butcher. Fox frantically races to save the pig's life--and does, by putting his surgeon's hands to use cutting meat all night for the butcher. Phew!
The trouble is, the next day, Fox shows up at Warner's, pig in tow, and Warner's daughter, sitting placidly on the stoop, doesn't react! She doesn't acknowledge the pig--doesn't pet it, doesn't smile, doesn't freak out the way kids sometimes do when confronted with the reality of an animal they've only envisioned. Nor is her apathy itself the punchline, insofar as we can tell. All that sweat-inducing set-up, no payoff.
Anyway, I think it's this lack of ruthlessness that ultimately became Caton-Jones's undoing. Does the shot establish that Fox accomplished his mission? Well, yes. That'll do, pig.
You can blink now.
Posted by Bill C at 3:51 PM 7 comments:

Labels: Apropos of Nothing, Michael Caton-Jones

Just a little screencap game while I clear out the cobwebs. A couple of movies have been on my mind lately, and I thought I'd present them from a different angle: by giving a look-see to the incidental shots between significant moments, the midpoint of a pan, the split-second right before a cut that sends us right back into the action. (For the sake of argument, let's just say that I want to celebrate every single one of those twenty-four frames per second.) Bet you wish you had that FaceBack app now, huh? There are a few telltale hints, so you eagle-eyes should be able to identify them. No prizes, I'm afraid, but would anyone care to take a crack?