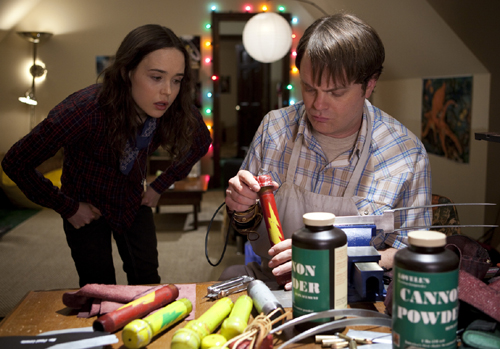 By the way, Jon Landau the movie producer is coming to my old college this Thursday to speak on "Business Ethics and the Meaning of Avatar." It should be downright hilarious.

Off topic, but this is very sad:

Thanks for the link, Jer. The passing of Sally Menke was a real gut-punch considering how much I appreciate Tarantino's films, and especially Walter's review of "Grindhouse" for pointing out the car crash sequence in which Vanessa Ferlito's character, Arlene, seems to be in romantic rapture a moment before her death. That sequence is marvelous evidence of someone who will be dearly missed because of just how devastating and top-notch editing work can be. It's also odd seeing as how Arthur Penn recently passed, too, whose "Bonnie & Clyde" was also given power thanks to Dede Allen.

Yeah, to be honest, I'm curious about the next Tarantino. I think he's the kind of director who might very well go overboard if not reined in by a good editor – see Robert Rodriguez.

She was one of the very few editors I know.

Unrelated, but if you think Armand White is the most irritating man alive, say aye!

(Just read his Social Network review, so many of them these days remind me of a dog eating its own shit)

Just got back from seeing Enter the Void in NYC, anyone see it yet? Thoughts? Either way, ambitious as all hell.

I just wonder what kind of movie-hating moron would post a review of a movie he admits he WALKED INTO HALFWAY THROUGH! Why don't you try to do something creative and put yourself out there instead of criticizing what other people are actually achieving?

Anon: Moron, maybe, but movie-hating? That would make me a big-time masochist.

You'll note that I didn't assign WHITE IRISH DRINKERS a star rating. What I wrote probably still constitutes a review, but I was honest, at least.

And not that critics need to justify themselves this way, but I have put myself out there in creative contexts unrelated to criticism. I'm not afraid of the shoe being on the other foot.