Notes from the Trenches

One of the biggest fund-raising events (maybe the only one outside of the film festival) for the Denver Film Society is a black tie gala thrown in celebration of the Oscars – it’s something that the local news covers to give you an idea about a lot of things – and I mention it because the Oscars are one of those things that anyone who actually cares about movies can only care about in a painful, kitsch-appreciation sort of way. I know that Altman is going to get an honorary Oscar this year – probably Scorsese next year, right? – and I know that that pimp song is going to win for best song even though, subject matter aside (and who gives a shiny shit about that anyway, yes?), it’s just bleeding horrible. It should bug someone that Eminem has more Oscars than Marty, but calling the Academy idiots year-after-year for sixty years inevitably leads to the realization that the real idiots are the ones that don’t stop being chagrined.

I think that Crash is going to win best picture – and I think that March of the Penguins will win for best documentary – and I think so because both aren’t just bad like the films nominated with them, but agonizingly bad, and that’s what the middlebrow slurps up with a spoon. Stupid, stupid, stupid – not the middlebrow which are invariably easy to predict and please, but me for still feeling like this relic from my childhood means a thing besides coaxing more of the middlebrow into the theaters tomorrow morning to catch up on the “best” films of the year.

The topic of egregious Oscar injustices is a deep one (I was reminded recently of the My Fair Lady sweep the year of Dr. Strangelove, just another log on the bonfire), and I’m tired of it to be fair – so I find some solace in this year’s stable of nominees in that there’s nothing that I’d root for so even a Crash win would only register as a bad film beating a bunch of mediocre films instead of a bad film beating a decent one in the usual year. Funny how this has been heralded in many corners as the year that Oscar got right. Oscar Night, for cineastes, is fast becoming Valentine’s Day for the lovelorn. This is the first year in more than twenty that I’m not watching it – the first year in five or so that I’m not writing an official piece on it. If I ignore it, it won’t go away, but reading the list in the morning is a lot less soul-sucking than watching the four hours proper.

Here’s hoping that Jon Stewart demonstrates the balls he demonstrated on CNN’s “Crossfire” a while back and calls it likes he sees it.

Finished my Dueling Divas series at the DPL with a screening of What Ever Happened to Baby Jane, Robert Aldrich’s sad, frightening, twisted self-hate fest/freak show. Attendance was healthy and discussion frisky. Next up a “City Streets” series starting with Nimrod Antal’s Kontroll and continuing through stuff like Midnight Cowboy but no Taxi Driver unfortunately: a title that was considered and voted down. Ah well – I’ll get a chance to talk Grave of the Fireflies next month so it’s all good. Also attended a screening of Failure to Launch which is, no kidding, one of the worst movies ever made.

Screenings of Joyeaux Noel and Evil under my belt – and am going to see the new The Hills Have Eyes, the new Dardennes brothers and the new Wim Wenders. Here’s hoping that all or one of them will wash tonight’s results out of my mouth. I did interview Robert Towne this last week in his hotel room as he smoked a thin cigar in a rather mephistophlean way. I didn’t like the film he was stumping. I felt like a wolf. Hopefully a transcript of that and BIFF coverage at long last (Boulder International Film Festival) will materialize before long. Awfully nice to be able to pick and choose who one interviews nowadays. 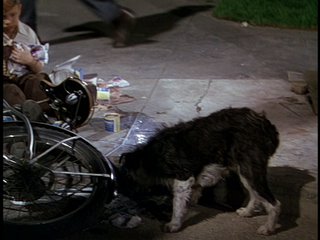 You were right about the Oscars, and I didn't watch them either (just checked up from time to time on the internet). I just can't. Year after year, it's the same back-patting story. ::sigh::

And here I said that the best way to predict these things was to set aside the cynicism as to what the Oscars typically award.

Of course, by not tuning in, you missed a surprising moment of accidental self-awareness when Paul Haggis accepted the Oscar for Best Original Screenplay, saying, "art is a hammer." There may have been further context for it, but I blacked out.

So the film written entirely in airquotes loses the big prize to the film written entirely in CAPSLOCK. It's not as egregious as Million Dollar Cripple's upset of The Aviator last year, but I'd be lying if I said I didn't actively hate Crash a whole lot more. Considering the magnitude of the backlash that's already out in force, the fallout promises to be quite a show.

Just curious: what were people here rooting for? I mean, I know that everyone here (save Alex) was rooting *against* Crash, but I didn't get the feeling that there was a whole lotta Brokeback Mountain love here, and none of the other three really seemed to have any passionate supporters at all.

I, for the record, actually really liked Brokeback, although I haven't seen three of the five Picture nominees. I was honestly only really watching for Jon Stewart, who was awkward at first mostly on account of his humor not being very broad or showy. The audience definitely wasn't feeling him at first, but it got a little smoother as it went on, and I generally thought he was pretty funny. I even liked the Cheney joke.

So, can we go back to talking about real movies now?

I was rooting for Munich, but I think it'll be a classic in twenty years, and that's the real award. I wouldn't have minded a Brokeback win - there was at least some very nice work in front of and behind the camera there. But the Crash win just really sucks. I know the Oscars are just a cultural barometer and have no real significance, but I'd have to go back to Driving Miss Daisy for a Best Picture winner I find so completely horrible.

Hey, just a heads-up that you're not alone.

I'm used to being called the "crazy film guy" in my social circle, and now I'll be forced to sit through hours of my friends talking about how much they loved Crash. I'll prevails by thinking about your site and knowing that you're out there, telling it like it is.

"Rooting for" would be a pretty small list-- Amy Adams for Supporting Actress, Corpse Bride for Animated Film, The New World for Cinematography, and Dolly Parton for Best Original Song, though "Travelin' Thru" is far from her best work.

Of the Best Picture nominees, I'm a fan of both Good Night and Good Luck and, until the last 20 minutes, Munich, though neither would be anywhere near my top 5 for the year. Brokeback Mountain was exceptionally well-acted but is just an inert film, and Capote has a handful of nice structural parallels to In Cold Blood but is hamstrung by Miller's middelbrow direction.

But I'll take "wink and nudge" over "screaming, carrying a cast-iron skillet, and running in my direction" any day, which is why I'd have preferred Brokeback Mountain to Crash.

Yeah, an Amy Adams win would have been nice. I would have expected this year's token indie/foreign/unknown winner to be either her or Felicity Huffman (famous in television, but unknown in film) instead of...nobody, especially given that Supporting Actress was an otherwise unspectacular category this year. Still, wierd. Did anyone even *like* The Constang Gardener? My mom and her best friend make a point of seeing just about everything that's nominated every year and she reported back to me that they both fell asleep watching that one.

But of course, Ebert liked it. Remember back when he was a vocal critic of the academy's consistently safe middlebrow voting? Funny that the last two year's the Best Picture has gone to his #1 film of the year.

Ebert has way, way too much influence over the Academy these days, I think for no other reason than that they are lazy/overwhelmed and he is an entrenched arbiter of the national taste. Had he stumped harder for Adams, it would've guaranteed a victory, but instead he beat the CRASH drum with the same fury he trumpeted MILLION DOLLAR BABY and Charlize in MONSTER.

Apathy aside, no words to describe my disgust as Crash takes home the Best Picture.

Browsing the upcoming releases, has anyone noticed the trend in which every other upcoming film trailer has a special not about being picked for selection or award winning at some film festival, being Cannes or Sundance or whatever? I'm reminded of one of my teachers from film school berating me for recommending Collateral - a "normal" film - because it wasn't a festival/arthouse flick; that particularly moronic elitism that suggests that festival and arthouse are instantly better than everything else on offer, failing to acknowledge the fact that 90% of movies are awful, both arthouse and mainstream. But that elitism is now sellable, so tacking on the "Official Selection" to every other film makes them desirable to the kind of idiots who just voted Crash for Best Picture 2005. (No offense, Alex, you have some reasons - not ones that I agree with - but reasons none-the-less beyond the jackasses who are recommending it on the proviso that it so succinctly deals with racism in a way that's clever, real or worthwhile.)

Ok, something else I want to know - I've just seen Capote, and I can't imagine what the hell they were trying to achieve. Were we meant to feel for Truman, feel for him as he sympathised with his subjects and was unable to cope? Were we meant to hate him for being an asshole and smearing them and not doing a great deal to help their plight? Did anyone actually like this film?

Ah, Walter's own DVD review gives away the screengrab: The War of the Worlds (1953).

HA - Good call, Jefferson, and kudos for reading my stuff. May be the only beneficial result, I have to say. It is, indeed, the best moment of 1953's War of the Worlds.