Notes from the Trenches 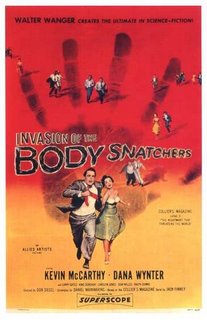 This Thursday will find me at the Denver Public Library to talk about The Day the Earth Stood Still, Invasion of the Body Snatchers, Village of the Damned, and The Incredible Shrinking Man in round two of the DPL’s newly-minted “Cinema Club.” It’s a great idea – you watch the movies on your own time (or come to the DPL on Thursday afternoons to catch a free screening) and then show up on the last Thursday of the month to discuss all the movies with me. I hope it gets the chance to catch on. The Cold War will be of primary interest this week, as you’d imagine, but it’s a deep well in here with two of the films censored by the Catholics in this country and a third changed markedly to appease an antsy studio. The more things change…

Attended screenings of Inside Man and Thank You For Smoking this week, experiences at both of which I mentioned earlier. Curious to me is how often the last two years the Holocaust is resurfacing in popular entertainment. Audiences are still nightmares, but I will say that incidents of cell-phone usage during the pictures seem to be slightly down so far in the first quarter of ’06. That could be, of course, due to the fact that there are even fewer people going to the movies this year than last.

Watched several films on DVD in a thirteenth-hour attempt to catch up on my queue – hopes that it translates into a burst of writing productivity probably in vain, but you never know. Targeting transcription of the Wenders interview for this coming weekend’s Sunday Feature. For fun, I caught a look at Soderbergh’s Bubble, the film released simultaneously on DVD and theaters a few weeks (months?) ago under Mark Cuban’s 2929 banner. The problem, as Bill articulated to me, of this tactic isn’t the theater-owners’ (and M. Night Shyamalan’s) odd worries, but that there’s no secondary market for the film now as it’s doubtful most folks will look at the title in a video store and have anything like a tickle of a memory of the title to spur on a rental.

In any case, it’s pretty interesting.

“Huff”, Showtime’s original series, is awful, by the way.

I also caught the first two Anchor Bay-released “Masters of Horror” episodes in their exhaustive, slip-covered and special edition-treated presentations – and wished beyond wish that they’d just packaged the whole thing on two or three flippers. I admire the idea behind the series, but started worrying when I heard that Takashi Miike’s episode had been pulled from broadcast. Nothing worse than dangling a “no MPAA” carrot and then self-censoring anyway because of what’s rumored to be something unsavory about fetuses – the two episodes, though, the John Carpenter and the Stuart Gordon, are fairly lawless, but still feel like one-hour anthology short films. Will spend some time in the review, perhaps, wondering why that is. 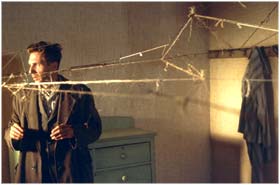 Will be doing a “one-shot” film and discussion in Gilpin County of David Cronenberg’s Spider while preparing for an upcoming talk about last year’s Kontroll at the DPL. Someone brought up the fact that the Denver library will be the first in the nation to offer films for download and I confess that I have no real opinion about the future of this practice in regards to viewers, studios, libraries, video stores, etc. . . I do know that they had a tremendous problem with theft at the central branch of the library, with just not enough budget under the local city administration to hire the proper amount of people to police/check-in the DVDs, resulting in a lot of folks taking the stuff into corners and the bathroom, removing the sensor stickers, and walking out of the library. I’m guessing here, but my first thought when I heard about this was that it was a response to that kind of theft: a way to keep a hand in that media without suffering the un-stemmed shrinkage and, on the other side, without straining their already anemic personnel budget.

Question in my head is who should be among the thirteen directors asked to do a second series of “Masters of Horror” (and should there be another series)? I got an obvious eye on Crony and Romero. Not so obvious, perhaps, but a shoo-in in my book: Larry Fessenden. 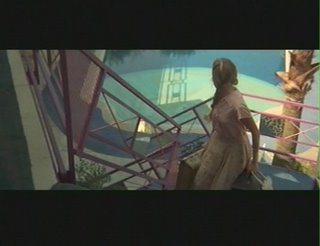 Bill provides the specs on two films I didn't care for: Bee Season and Chicken Little - and I forgot to mention that the 3rd Annual Vail Film Festival has asked me to be on a critics' panel with, among others, Entertainment Weekly's Owen Gleiberman. Good time to ask about his rave of The Dukes of Hazzard?

Question in my head is who should be among the thirteen directors asked to do a second series of “Masters of Horror” (and should there be another series)? I got an obvious eye on Crony and Romero. Not so obvious, perhaps, but a shoo-in in my book: Larry Fessenden.

Possibly (probably) wrong, but let's give it a shot. L.A. landscape, ahhhh... The Opposite of Sex?

Jack, m'man, it is indeed, Altman's 3 Women. The girl in the frame is Sissy Spacek - most recently of Nine Lives, I guess, which is, interestingly enough (or not), sort of a cheapo take-off on Altman's Short Cuts.

I'd love, by the way, to see Matthew Barney do a horror film. Holy sheet.

I have to question some of those "Masters" of Horror. I realize Mick Garris spearheaded the thing, but I wish he'd had the humility to decline the opportunity to direct one. William "Fear dot com" Malone's also got a lot of nerve.

If they weren't already working on a Two Evil Eyes-style portmanteau called Grindhouse, I'd suggest Robert Rodriguez and Quentin Tarantino for season two. Really looking forward to that flick.

The obvious choice would be Cronenberg, but that would somehow be a retrograde move. I vote for Kiyoshi Kurosawa, Lars von Trier (though I'd rather wish he would do "Riget III"), and maybe Aronofsky?

I know it'll never happen, but Spielberg is at his best at his nastiest and I think he could do a great Masters of Horror ep.

and I forgot to mention that the 3rd Annual Vail Film Festival has asked me to be on a critics' panel with, among others, Entertainment Weekly's Owen Gleiberman.

Well, don't give him too hard a time, Walter. After all, he does prefer Manhunter over The Silence of the Lambs. But, hey, his dismissal of the underrated serial-killer thriller Jennifer 8 has always stuck in my craw Plus, I was re-reading his review of The Rock, and it's got a good 4 or 5 laugh-out-loud witticisms to its credit.

Gleiberman's diss of O Brother, Where Art Thou?, calling it the worst of 2000, still sticks in my craw, although I understand the politically correct direction he was coming from. I'd post a link, but it doesn't appear to be online anymore.

All critics will say questionable things at one time or another. Not saying Gleibs is a "good" critic -- I'm not exactly a good judge of that sort of thing -- but if every critic sucked just because they liked a movie you hated or hated a movie you liked then that would probably mean that every critic in the world would suck. Which maybe they do. But I'd like to think that they don't. But the love for Dukes of Hazzard was indeed a bit puzzling.

I'll take Gleiberman over the pathetic Lisa Schwarzbaum any day of the week. She oughta marry Richard Roeper, they have a lot in common.

I think the whole bubble thing is really interesting and you're right about how people rent movies (vs. go watch them at the theater)...

ah...and cell phones, good to hear it's down...I always bail out and don't see movies in the theater at least for the 1st four months of the year if I can help it.

I saw more than one awful, 1-star reviews of O Brother, Where Art Thou? which certainly mystified me when I saw it (and I've been called PC by more than one person, erroneously I believe but nonetheless). Admittedly at least one of them was in one of those leftist (not necessarily meant as a diss) local free newspapers, and I've decided they can't review movies after the OC Weekly panned Oldboy and V for Vendetta.

Once you get a big, flat-screen LCD or PLasma, there's no more going to the movie theater.

At least that's my experience.

I'll take Gleiberman over the pathetic Lisa Schwarzbaum any day of the week.

I concur and will also take Mike Clark over Claudia Puig at USA Today any day of the week. Hell, Owen should pay heed to us, for with Puig and Schwarzbaum and himself, he's got the ingredients for a menage a trois after all.

Yeah - not so certain about the creds of a couple of those "Masters" of horror. I'd be sort of curious to see if those two dudes who did Blair Witch Project and ten nothing else have anything else in the chamber. I fear that someone like Eli Roth or Alexandre Aja would be choices du jour next round.

What's up with making a damn sequel 14 years after the fact? I mean, let's be frank: Sharon Stone was a cineplex-attending/popcorn-muncher's idea of "hot stuff" back then, but at the age of 48 and not a box-office draw after a mere 2 years after the original, and the producers think people are going to line up in droves to see this nobody-was-asking-for-it sequel. I'd like to see the sequel, truth be told, because I respect the director and have always found Stone sexy and a bit underrated as an actress (her turn as the death-row inmate in Beresford's Last Dance was superb stuff). So I'm not condemning the film before I've seen it; rather, I'm looking at it from a business perspective and see it as a whoppingly dumb thing to have financed.

Believe it or not, Jack, because of the peculiarities of Hollywood math, it was cheaper to make the movie than not to, even if it bombs, because the whole sequel deal had become tangled up in pay-or-play contracts.

I think David Cronenberg said in Premier magazine a while back that he considered directing it because the script was brilliant.

He was probably referring to an earlier version of the script, but still that peaked my curiosity.

So, like, does it take place in the future or something?

No, just the opposite: London. And the script might have been brilliant in Crony's hands: in Caton-Jones hands, it's just skeezy.

Walter, Caton-Jones isn't the greatest director around by any means, but his direction is usually competent. Could he have fucked up this so-called brilliant script that bad? I mean, sure, if he employed the kind of over-the-top camerabatics that, say, Oliver Stone used in Natural Born Killers; but I don't see him doing that with B.I.2.

No, just the opposite: London. And the script might have been brilliant in Crony's hands: in Caton-Jones hands, it's just skeezy.

OK, now I'm really really curious. The script has an interesting pedigree. Henry Bean wrote and directed The Believer and co-wrote Deep Cover. His wife and co-writer Leora Barish debuted with Desperately Seeking Susan. I think that it's wholly possible that the script was great but kind of delicate and needed a director who knew how to use it. Caton-Jones may not be that director.

Sorry, I have to see this movie no matter how bad it is.

That Cronenberg interview by the way was in Cinescape actually circa 2003 I think when he was promoting Spider.