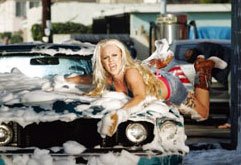 Shortly after putting David Meyers' video for Pink's new single "Stupid Girls" into rotation yesterday afternoon, Canada's MuchMusic ran a borderline-treasonous PSA encouraging viewers to stop to chew the images the network is feeding them by way of brusque juxtapositions (we're asked to consider, for example, whether the particularly skeezy video for Christina Aguilera's "Dirty" is "trailblazing" or "tasteless"), thus finishing the attack on anti-intellectualism that Meyers and Pink started. In "Stupid Girls," the Devil and the Angel (both Pink) appear on opposite shoulders of a little girl as she channel-surfs through contemporary pop-culture, giving Pink the opportunity to send up a host of tabloid tarts, some more cleverly than others. Granted, the slier the jab the longer it takes to recognize the celeb being roasted, since what makes Pink Pink is her dissimilarity to the cookie-cutter starlets--she doesn't have the Rorschach countenance of your average "Saturday Night Live" cast member.

Aesthetically, it's not the most imaginative piece of sinny (the comedy ones usually aren't, unless they're directed by Spike Jonze), but as it's the first time, ironically, that Pink's iconoclasm hasn't felt like a Halloween costume (to me, at least), the piece is undeniably appealing. It's mean, but mean in a constructive way that shows the likes of Lindsay Lohan and Paris Hilton to be their own worst enemy. The Big Bad Media isn't entirely let off the hook (the little girl in the video is watching TV, after all), but it also isn't held accountable for the narcissistic behaviour of our current "role models," which must qualify as a huge breach of protocol in LaLaLand. Alas, the ending of "Stupid Girls" reduces the whole thing to cheapjack feminism: upon having soaked up so much vapid imagery, the little girl is given a choice of playing with Barbie stuff or a football and chooses the football, to the Angel's delight. The problem isn't that Jessica Simpson (parodied above) is all estrogen and no testosterone, it's that she's a dim bulb--the song even says so. There should've been a third option next to the Barbies and the football: a book.
Posted by Bill C at 4:29 AM

Yeah, the ending for that video is really obnoxious. It's also ironic in that apparently, non-media whores are SO intelligent that colleges across the country now discriminate in favor of dudes, and a father in Massachusetts is demanding that all the boys in his son's school have their grades raised, on account of education being so stiflingly feminine. Boys are SO troubled that every time I wanna buy a Coke, I have to stare at a line of magazines, each featuring some boy traumatized by his inability to sit still in class and pass in homework. So, um, what's the problem again?


The fault with Jessica Simpson isn't necessarily that she's a dim bulb, either: it's that she's the product of some sort of monstrous heavily religious/consumerist upbringing where her rightful place has always been as a piece of meat. Look up some quotes by her dad, he's a frickin' horror. Blaming the tart in absence of a critique of the larger system feels like Pink just Chris Guesting it up: making fun of dumb people because it's easy, and makes you feel extra smart.

Hearing Pink railing against conformity is like hearing Dita Von Teese complaining about unhealthily thin, conformist women-- so much unacknowledged skinny, white hetero privelege makes for a particularly toothless satire, the reason that her parody of JS is indistinguishable from the real thing, and why she continues to objectify herself in all of her videos. (Oh Pink, don't you understand that as a female performer, the transgressive thing would be to *not* go nakedly all the time?) Something better would've seen her as Kate Moss, sniffing coke at Disney World, and parading Asian women on leashes like Gwen Stefani.

Couldn't agree more, Rachel, and in fact I cut a whole tangent from that post about the video essentially boiling down to Pink calling the kettle black. You articulated it much better than I did. But while I agree that Simpson is less a bimbo than she is a Frankenstein's monster (when "House" parodied her relationship with her father, it made them literally incestuous), I was more using her name in an "insert icon here" fashion.

My love for Gwen Stefani would be complete and total if not for those damn Harajuku girls.

I have never, never, ever been able to buy Pink in anything she's done, this song especially. If she can't find "outcasts and girls with ambition," she's not looking very hard at all. The line about "what happened to the dreams of a girl president" is particularly galling, coming at a time when both political parties have viable female presidential candidates. The problem with this song is that it implies that Pink is ONLY listening to the tabloids.

What's interesting about the lyrics is the idea that the girls Pink is mocking are somehow without ambition. By current standards, Paris Hilton is the height of ambition: her own jewelry line, perfume, a burgeoning movie career. Lindsay Lohan, meanwhile, has been working since she was a fetus, harder than Pink, I bet. No doubt Jessica Simpson sang in a whole lotta malls before she had the honor of washing a car in her own expensive video. Because if you're a girl, you better market yourself.

Talking about being president and being an outcast... well, those are mutually exclusive wishes, aren't they? Who, in fact, is more qualified to be president than Paris Hilton? Thus lies the irony, frailty of Pink's argument: the roles of power are for those who are already supported by, devoted to support the status quo.


About Gwen Stefani: I used to but no longer love her. She's just the Dread Pirates Madonna: once "edgy", now agressively bland in order to be endlessly reconstructable, to appropriate each new trend: pretentious yet substanceless, if not offensive. Fabulous business, dumb art.

A couple neat visuals. That breast implant gag sort of reminded me of Tom Petty and the Heartbreaker's "Don't Come Around Here No More" video. Obnoxious song though, is she the Powerpuff Girl version of Eminem now?

Speaking of blonde singers, listen to Susanna and the Magical Orchestra. They have an album out called List of lights and Buoys and it's insanely good.

Sorry to hijack the thread.

Rachel, I respect your feelings on this issue and I think you did a splendiferous job of articulating them, but I think that it's probably a mistake to say the video would have been better off by skewering Gwen Stefani and Kate Moss (although Gwen Stefani would most definitely not have been an easy target, and I share your contempt for her "persona," so maybe I would have admired that). Those seem like two fairly insular critiques; not many girls (relatively speaking) aspire to have a posse/fashion accessory comprised of Japanese girls and be coke-sniffing divas, I'm guessing. Though the more sordid news stories involving Mary-Kate and Lohan, Paris Hilton and Jessica Simpson are not to be admired, I don't think that was the point of the video (and maybe you're already two steps ahead of me here, but bear with me). Those were all supposed to be sort of archetypal examples of how femininity is defined by the media, I think. Whether or not that's an accurate critique is another story. I can see where Pink's coming from as far as pop culture consciousness goes, but I don't think many girls actually aspire to do the things that the celebrities she skewers do. Although I think (taking into consideration the rest of the video) there's something in there about the people who are fed these images being almost complacent in their objectification, against which the choice to play football might be a little bit of a rebel yell. Playing football doesn't make you a more complicated girl than your next door neighbor who doesn't, but it was the easiest way to end that "video essay" with an example of rebelling against cultural expectations. The girl could pick up a book and read, but that doesn't necessarily mean anything's changed, if you see what I'm saying.

those seem like two fairly insular critiques; not many girls (relatively speaking) aspire to have a posse/fashion accessory comprised of Japanese girls and be coke-sniffing divas, I'm guessing.


I'm not so sure. Girls may know they won't ever have the money to rent human beings out-- however, that won't stop them from treating Japanese women like shit because they believe them to be weak/docile/inferior. Meanwhile, when it comes to Kate Moss, I can bet that a whole lot of girls look up to her, if for no other reason than that she dated Johnny Depp. That is, if you want him, you better be her. Also, what Gwen and Kate Moss (and, again, Madonna) have in common is self-made fame and some sense of longevity- Paris is "hot" but Kate, Gwen are likely more active as arbiters of success. So yeah, they are definitely relevant-- however, you're right in that it's largely a desire to see Pink tackle more difficult (read: riper for skewering) targets.

Though the more sordid news stories involving Mary-Kate and Lohan, Paris Hilton and Jessica Simpson are not to be admired, I don't think that was the point of the video. Those were all supposed to be sort of archetypal examples of how femininity is defined by the media, I think.

But like Bill says, the video barely slaps the media's hand. The video is almost wholly devoted to mocking women. Pink never parodies the men in her scenarios: you're laughable if you attract the male gaze or attempt to. In that way, the video resembles "Shallow Hal"--maybe it really is about the media, or about the absurdity of men, but the jokes aren't pointed that way. Pink fails for going for the easy joke that in turn scrambles any satire: the equivalent of Gwyneth Paltrow's unfurling underwear.

against which the choice to play football might be a little bit of a rebel yell. Playing football doesn't make you a more complicated girl than your next door neighbor who doesn't, but it was the easiest way to end that "video essay" with an example of rebelling against cultural expectations.

Except Pink's buying into cultural expectations by giving the girl that binary decision. The concept of the tomboy is merely the other option of convention. All Pink is doing is reaffirming girl's loathing of the feminine (and even "girly" girls tend to think of the feminine as inferior). More productive to mock jocks, to let boys to wear skirts. Of course, that would've required making dudes the target.

Meanwhile, the only way she can define ambition is by the presidency: another conventional ideal shaped by the priveledged narrative.


I have problems with Shakira, but her song, Don't Bother (lyrics here)-- really nuanced for a big pop hit-- acts as a great counterpoint to Pink's attempt, reframing the debate to attack male expectation. She refuses to attack the other woman, positively reaffirming her own autonomy. The image of playing football reappears, not as the symbol of rebellion, but merely further contortion to the male gaze.

I love this great counterpoint to Pink's attempt, reframing the debate to attack male expectation. But I like this Don’t Bother Song Lyrics. She refuses to attack the other woman, positively reaffirming her own autonomy.